All about a subjugated Eve 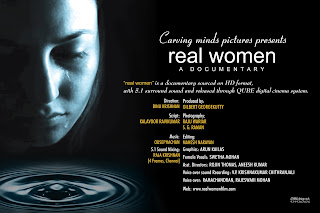 “The body of the woman was like a burnt fish,” says R. Sreelekha, the first women IPS officer in Kerala who was doing an inquest following a post-mortem. “Later I saw that she was pregnant and the foetus was half way out of the body. It was a traumatic sight.”

Sreelekha shakes her head and says, “The perpetrators should see the results of their actions. Then only will they understand how terrible it is. It is sad, but the atrocities against women are on the increase.”

Sreelekha was giving her views in the documentary, ‘Real women’, produced by Carving Minds, which focuses on the problems women face in Kerala.

There is Parvathy, the television anchor who recounts the experiment she conducted with the help of journalists. When she told a group of scribes she had to reach home before it got dark, because of the danger of sexual harassment, they mocked her fears.

So, at 7 p.m. Parvathy walked alone on the streets of Thiruvananthapuram and within minutes, two young men on a motorbike came close and passed lewd comments. Then as she carried on walking a man came up, grabbed her hand and tried to pull her away. It was at this moment the other journalists intervened.

“I shivered in fear,” she says. “Women are so unsafe in Kerala.”

Right from the beginning of the documentary, when farm labourers talk about the discrepancy in daily wages, as compared to the men, the film traces the problems faced by women in different areas: schools, colleges, the work place, and as auto rickshaw and bus drivers, and conductors.

Bus conductor Lekha talks about how men try to press their bodies against her when she is trying to do her job. “They will not obey me when I tell them to move to the back just because I am a woman,” she says.

Sandhya, the auto-rickshaw driver says she is unable to work beyond 6 p.m. because of fears for her physical safety.

In between there are interviews with notable personalities like poet Sugatha Kumari, Justice D. Sreedevi social activist K. Ajitha, politicians, Savitri Lekshmanan and K.R. Gowriamma, as well as film directors, Kamal and Sathyan Anthikad who talk about the problems faced by women.

Anthikad spoke ruefully about the complete absence of women on the technical side in the film industry. He described the hesitation on the part of distributors when he told them he was making a film with women as heroines: ‘Achuvinte Amma’. This movie went on to become a super-hit.

“It shows that viewers are interested in women’s issues,” he says.

There is an interview with a young girl, her face obscured, who talked about how her father made sexual advances on her. “I was touched when, after the shoot, she told me she trusted me that I would blur her face,” says director Binu Krishnan.

But, sadly, most men cannot be trusted. Even somebody as confident as actress Padmapriya says, “I travel only in the daytime. Unfortunately, there is always a sexual perspective to a woman’s life.”

The scene suddenly shifts to Mumbai and shows, in stark contrast, the freedom that women enjoy there. There are shots of women travelling alone at midnight on suburban trains and a visual of a Malayali woman, Usha R. Pillai, a government employee, having a snack by herself in a restaurant at 8.45 p.m. “Can you imagine a woman doing something like this in Kerala?” she says.

‘Real Women’ is an intense, sincere film, made possible by the desire of US-based producer Gilbert Georgekutty. Speaking on the phone from New Jersey, he says, “I have met a lot of Malayali women in the USA, Canada, and Britain who don’t want to come back to Kerala because of the sexual harassment and the low status of women there. They love the freedom they enjoy in Western countries.”

Georgekutty says that this subjugation is the biggest social problem in Kerala. “It is a bigger issue than alcoholism,” he says. “I know I will not recoup my investment of Rs 8.5 lakh, but this is something I wanted to do for a long time.”