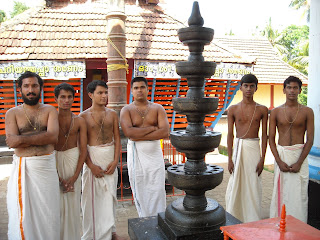 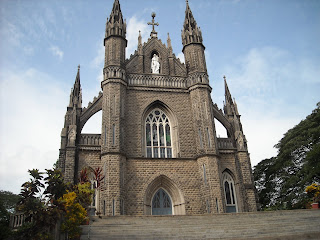 Students in Christian, Hindu and Muslim seminaries want to serve the people, spiritually and materially, once they pass out

Photos: The students of Thanthra Vidyapeedham and the chapel at the St. Joseph's Pontifical Seminary

On a Friday evening, several youngsters are milling about in the courtyard of the St. Mary’s Basilica church in Kochi. Parents, friends and relatives are busy congratulating the young men. After completing three years of philosophy at the St. Joseph’s Pontifical Seminary, Aluva (28 kms from Kochi), there is a ceremony where they are officially handed over the white cassock which the Catholic priests wear.

“That does not mean they are qualified priests,” says Fr. Antony Nariculam, a professor at the seminary. “They will have to complete another three years of theology studies before they are eligible.”

Running around with a visible joy on his face is Varghese Moonjely, 22. “You cannot imagine how excited I am now,” he says, placing his palm on his chest. “My heart is overflowing with happiness. It’s a fantastic feeling to wear this white cassock.”

The son of an autorickshaw driver, Varghese wanted to be a priest right from his childhood, when he served as an altar boy during the mass. “I saw the religious and social activities of the priests and wanted to be like them,” he says.

Asked what he hoped to achieve as a priest Varghese says, “I want to help the poor, be the voice of the voiceless and be of service to God.”

Varghese sounds enthusiastic, but veteran teacher Fr. Antony is disappointed with the seminarians of today.

“They want more material comforts and conveniences like a mobile phone, as compared to the frugal mind-set of previous generations,” he says. “There is far less intensity in their prayers and meditation and a lack of focus.”

The sprawling campus at Aluva has beautiful flowering trees and manicured lawns. “There are about four hundred students,” says Fr. Mathew Illathuparampil, a teacher. “It takes around ten years to become a priest.”

There is a pin-drop silence at the Thanthra Vidyapeedham (the Centre for Vedic and Tantric Studies and Research) in Aluva. It is located beside the Cheriyathu Narasimhaswami temple on the banks of the Periyar river.

Only a few students are present. All of them are bare-bodied, and wear a white dhoti. Several have gone home for the summer vacation. Those who have stayed behind have to perform certain essential rituals in the temple.

Established in 1972 by the late Madhavji, a senior pracharak of the RSS, the vidyapeedham teaches ancient Tantric rituals, which is used in all Kerala temples.

“Earlier, the teachings were passed on by word of mouth but now we have a formal method of training,” says C. Sukumara Varma, the manager.

It is a seven-year course and the subjects include English, Tantra Shastram, Vedas, Astrology, Sanskrit, Vaastu shashtra and the Puranas.

There are 45 students ranging in age from 16 to 23. Among them is eighteen-year-old Krishnajith. “I joined the school because I wanted to learn the rituals,” he says. Once he completes the course, Krishnajith plans to become a Sanskrit teacher or a priest. “I am still undecided about this,” he says.

P.K. Sriraj, 18, had been interested in Tantric rituals from his childhood since his father, uncles, and cousins are priests. “So I had a natural inclination,” he says.

He joined the Vidyapeedham after he had completed his Class ten exams.
Sriraj and the other students exchange smiles. They seem to have an easy camaraderie. But the secretary, Mullappilly Krishnan Namboodiri feels the pupils of today are different from the past. “The intensity and the dedication is less,” he says.

New admissions are taking place at the Azhar-ul-Uloom seminary at Aluva on a Sunday morning. Helping the youngsters to fill their admission forms are Mohammad Jalees, 20, and Sajid Khan, 22.

Sajid has just completed the six-year course. It was through a former student, Hassainar Alathur that Sajid had heard about the seminary. Sajid decided to join, once his parents in Vadakkancherry gave the go-ahead.

“But my friends were skeptical and asked whether there would be any tangible benefits by doing this course,” he says.

They also felt that the seminary is a strict place and it would be difficult for Sajid to live there. “But they did not know that when you live in a disciplined system it is good for one’s character,” he says.

Sajid says he would like to attach himself to a mosque and serve the people. “There is a breakdown of morals in society,” he says. “I would like to show people the right way.” He said he would also like to teach the Koran to youngsters.

Final year student Mohammed Jalees, 20, wants to study further. “When I get the chance I would like to give a talk to the faithful on Fridays,” he says.

There are 100 students whose age ranges from 16 to 23. However, the dropout rate is high. In Sajid’s class of 40 in the first year, only 11 managed to reach the end. In Jalees’ section only 5 out of 45 have stayed the distance.

Some leave because of their inability to stay in a hostel, some find the discipline too much, while others simply lose interest, says Jalees.

But for those who stay on, M.M. Shahjahan, teacher of Islamic studies is all praise. “The students are hard-working and confident,” he says. “Unlike earlier batches, they have no hesitation to ask questions whenever they have any doubts.”