The wonder that is Milan 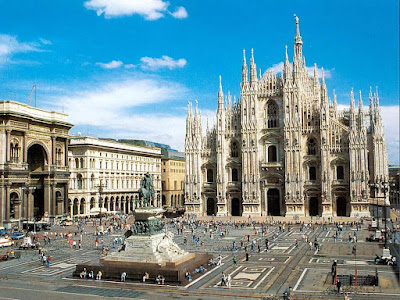 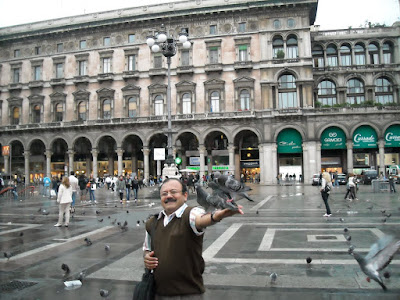 The Cathedral at the Italian city is one of the great monuments of the world. But the city offers a lot more, in terms of history and architecture

Photos: The Cathedral at Milan; the author with pigeons on his arm

In a Milan Underground Metro train, I get a reminder of India. A Romanian man, wearing a suit and tie, but carrying a harmonium walks around, playing songs. He is accompanied by his wife and a eight-year-old daughter, with red cheeks. She holds a red plastic cup in her hand. As is usual in Indian trains, most of the commuters ignore them, but a few are generous. A man sitting next to me drops a 2 Euro coin in the cup. The musician acknowledges it with a nod of his head.

Opposite me sits a Slovakian couple. The wife is very angry. She is yelling at her husband, but the man adopts a ‘no response' attitude. Soon, her voice grows louder. In the end, he responds with a few soothing words of apology, and she is suddenly mollified. It seems that wherever you go in the world, the relationship between man and woman is always a conflict-ridden enterprise.

At Duomo station, I get off. I am accompanied by regular Milan visitor Anil Mulchandani. As we climb up the steps and reach the surface, Anil says, “Look behind.” I do so and immediately my mouth opens in awe. Right in front of me is the sparkling white marble-faced edifice of the Milan Cathedral. It is several hundred feet high and is the second largest cathedral in the world. I have to crane my neck to see the top. There are numerous spires and towers.

The Cathedral is 500 years old and has been constructed in the neo-Gothic style. Astonishingly, there are no entrance fees. You can just walk in. And again I can only draw in my breath in shock. The area above the altar is a few stories high.

There are huge pillars and naves. Large paintings of events from the Bible hang from the balustrade of the balcony. There are massive windows on all sides. To give an idea of the size, 40,000 people can easily fit inside and listen to Mass.

It is one of the great monuments of the world. The great American writer, Mark Twain said: “They say that the Cathedral of Milan is second only to St. Peter's at Rome. I cannot understand how it can be second to anything made by human hands.”

Outside is the large Duomo Square, which is off-limits to traffic, and is ringed by shops on all sides. As I gaze at a statue of Vittorio Emanuele II, the first king of unified Italy, sitting astride a horse at the centre, an Algerian man, with crinkly black hair, comes up. In a swift movement, he pulls back my fingers and places bird seeds on my palm.

Within seconds, several pigeons land on my arm and some begin pecking at the seeds at once. The Algerian grabs for my camera, but I manage to give it to Anil, who takes several shots. Once the seeds have been eaten, the pigeons fly away. “That will be five Euros,” says the unsmiling Algerian. I offer two Euros, which he quietly accepts.

If you walk straight from the Duomo Square, for half a kilometre, you will reach the 500-year-old Castello Sforzesco, the seat and residence of the Duchy of Milan. It has several museums and art collections.

What I like most is to gaze at the moat, which is no longer filled with water, but it reminds me of the many stories I have read as a child, of the drawbridge being drawn up, and the moat filled with water, so that it could act as a defence against enemies.

I enjoy walking on the smooth sidewalks of Milan. One sight reminds me immediately of the city of Kolkata. Milan also has functioning trams but they move past, with much less noise and clatter.

As is the habit in the West, motorists never honk. The only sound is the hum of smooth-running engines. So, when an ambulance whizzes past, with sirens blaring, a woman finds the noise so deafening, she bends her body and places two fingers in her ears. I think to myself: what will happen to her if she came to India and experienced the cacophony of our traffic? Perhaps, a nervous breakdown!

But on the roads and in the shops, restaurants, museums, malls, exhibitions, and in public transport, it is the women that send heartbeats thudding in the rib cage. Dressed in sexy mini skirts and hot pants, with six-inch stiletto heels, with long, shapely legs, and glowing skin and proud breasts, they are, to be honest, the best sights in Milan. You could spend a few lifetimes staring in admiration.

But, of course, there are non-human sights which are also worthwhile: the Galleria Vittorio Emanuele, a shopping gallery, the Brera art gallery, the Pirelli tower, and the San Siro stadium, which is the home of the famous football club, AC Milan.

In several shops, you can see T-shirts and shorts with the AC Milan logo on sale. Milan also houses one of the world's most famous paintings: Leonardo da Vinci's The Last Supper. It is also where the La Scala, one of the best opera houses in the world is located.

I have the good fortune to attend an opera at the Teatro Dal Verme. A 100-member orchestra, apart from 75 choir singers, uses a variety of instruments, like violins, cellos, guitars, brass flutes, trombones, drums and harps to make some striking sounds.

Unfortunately, to enjoy opera is an acquired taste, just as it would be for an Italian to enjoy Indian classical music. Nevertheless, the experience was worthwhile, especially with the 6' black compere, Ainette Stephens, the Venezuelan-born television personality, looking absolutely stunning in a micro-mini black dress.

Mamma Mia, am I going to have a heart attack?