A nose for news 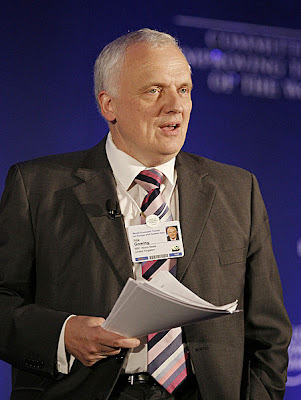 Nik Gowing, of the British Broadcasting Corporation, talks about the qualities needed to be a good television journalist

Nik Gowing, the anchor for the popular South Asian news programme, The Hub, of the British Broadcasting Corporation, landed from Doha at Thiruvanthapuram, at 5 a.m. on a Sunday. Then he managed a couple of hours of sleep before he arrived at the Kanakakunnu Palace, the venue of the Hay Festival, at 9.30 a.m. Thereafter, he proceeded to prepare for his 11.15 a.m. lecture, titled, ‘Skyful of lies’.

Gowing has reported from more than 100 countries, about epochal events like the imposition of martial law in Poland in 1981, and the fall of the Berlin Wall in 1989. He was the only journalist in Afghanistan when Russian forces began to withdraw from the country in 1989.

“They had shut the whole place down, but I managed to get in,” he says. “I was able to show the planes taking off. This upset the Russians a lot. The moments in my career which mattered to me a lot were the times when governments did not want information to be made known to the public.”

Gowing has a high reputation, but there is a lot of hard work behind the glamour. “One of my guiding principles is that I am always fearful of what I don’t know,” he says. “That means, I get up early, listen to the radio, do as much of reading as possible. It is a constant process of listening, of reading, of making judgments, of meeting people. You can’t just drive to work, sit at a desk for a few hours and leave. It is a 24 hour job, although I do sleep sometimes.”

Gowing is excited by the media scene in India. “What is fantastic is the number of English news channels,” he says. “I think there are 37 now. Percentage wise, the BBC has a lower number, but in absolute numbers we are doing well, because, more people are watching TV. People now have options, and we are part of that choice.”

Asked for tips on how to be a good anchor, he says, “Learn to treat a piece of glass as your friend. I am talking to you as a human being, but normally I have to look at a camera lens and do most of my talking. It is like staring into darkness, but I always imagine I am talking to my friends around the world.”

He says that the anchor should know the answers to the questions before he asks them. “Sometimes, the answers may not be clear,” says Gowing. “So you say, 'I don’t understand that.' Sometimes, it helps to play ignorant. Secondly, you have to know everything about the person you are interviewing and the subject.”

Asked whether he gets stressed out by the pressure, Gowing says, “I love my job. In fact, my heartbeat is actually lower when I am on air than off.”