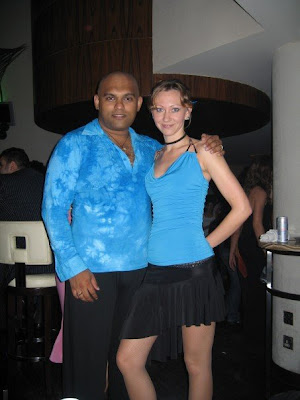 Shiva Loco, an expert of dances like the tango, the salsa, hiphop, and ballroom dancing, has opened a studio in Kochi

At 11.30 a.m. on a Saturday, Pappammal Arumurgam has an expectant look on her face. Wearing tight blue jeans, a black top, and stiletto heels, she waits for Shiva Loco to start the dance session in a first floor studio at Panampilly Nagar.

Shiva is a most unlikely dancer. He weighs 92 kgs and has thickset shoulders, a prominent paunch and a bald pate. He switches on the music and it is Puerto Rican singer Tito El Bambino’s ‘La Busco’, a slow reggaeton – a type of music from Latin America.

Pappammal and Shiva face a wall-length mirror. On Shiva’s right is the tongue-tied V. Anand who worked for costume designer Sabyasachi Mukherjee in the Hindi film, ‘Guzaarish’.

As the music flows through the speakers, they move forward and come back. Then forward and back again. There is a sensual shake of the hips and the legs. Shiva surprises with his deft movements, despite his size. They carry on dancing for several minutes.

Later, he says, “We were doing the bachata. This dance originated in the Dominican Republic. The proper hip movement is crucial for good communication between the dancers.”

Pappammal smiles and says, “I love this dance. It is so beautiful.” A trained Bharat Natyam dancer, she works in Info Park at Kakkanad. “The job is stressful,” she says. “So I come here to unwind.”

In his Kochi studio, Shiva teaches 36 types of dances, depending on the customer’s preferences. They include the salsa, hiphop, merengue, belly dancing, Argentine tango, contemporary, ballet, jazz and ballroom dancing. In ball room dancing, he can teach you the quick step, foxtrot, tango, samba, Viennese waltz, and the cha cha.

Dance is clearly a passion for him and Shiva, 30, has been doing it all his life. At the age of five, while staying in Abu Dhabi, he was a hyperactive child. Teachers advised his mother to teach him dance or karate.

His mother chose dance and Shiva was enrolled in Meena Nair’s dance school where he learned Bharat Natyam for five years. At the age of 17, Shiva went to study pre-medicine and computer information at Ohio State University.

“One of the university coaches, Igor Valeryvich Ishakhov, saw me dancing and told me that I had something special inside me,” says Shiva. “Igor asked me to join the university dance team.”

Shiva practiced three hours a day. Competitions were held every fortnight in places like Massachusetts and California. It began at 8 a.m. and lasted till 9 p.m. “I was Midwest US champion in ballroom and salsa for five years,” he says.

Thereafter, Shiva went on an odyssey. He has danced and taught different dance forms for people in France, Bulgaria, Belgium, Germany, Spain, Luxembourg, and Austria. “I have been to Japan for three months, to teach people dance,” he says. Other places include Kenya, South Africa, and Russia. He also went to Argentina and spent six months there so that he could learn the tango.

So does he have a favourite dance form? Shiva shakes his head and says, “In the morning, if I am in a vibrant mood, I might do the samba. If the setting is very romantic, then I will go for a bolero. If it is very intense, I will do the tango. If there is a celebration it will be the salsa. Finally, if I am a flirtatious mood, I will try the Zouk (a Caribbean dance).”

After all his travels, Shiva has now come to Kerala. “The weather is perfect for a guy who has lived from plus 60 degrees Celsius to minus 45 degrees,” he says. “And for a guy who was born in the desert, I just love to walk in the rain.”

But can Keralites be adept at dancing? “They are good,” Shiva says, emphatically. “During the Thrissur Pooram festival, guys get drunk, and start dancing. They might not know each other, but as a group they synchronise so well. Malayalis have a special feel for music. You will not find anybody else in the world listening to the radio as much as Malayalis.”

So, with kudos to the Malayalis, how did this Malayali -- Shailesh Nediyeadeath Mama Karunakaran -- get the unusual name of Shiva Loco?

“The people in Puerto Rico began calling me Chiva Loco,” he says. “Chiva means addiction, while loco is crazy. So, it means a crazy addiction for dance.”

That is indeed clear when you see Shiva Loco in action.