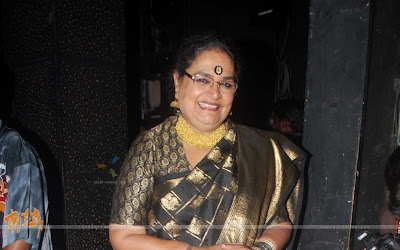 It was a complete surprise when I won the Filmfare Award, last month, the mother of all prizes, for my song ‘Darling’ in ‘7 Khoon Maaf’. In fact when [actress] Urmila Matondkar announced that I had won, I went numb, and felt like a zombie. When I went up to the stage, initially, I could not speak.

It took me 42 years to get my first Filmfare Award. And I spoke whatever came to my mind, even as my eyes filled up with tears. That was why it was so moving for everybody and they gave me a standing ovation. Because the audience knew that it was not a prepared speech. It was straight from the heart.

‘Darling’ had an impact because it was fresh and new. Composed by Vishal Bhardwaj, it was based on an 1860 Russian song, ‘Kalinka’, so it had an unusual melody, and the treatment of the song, as well as the chorus, was very different.

I never got frustrated that I did not win the award earlier. But I did feel sad that every time I was nominated -- for ‘One Two Cha-Cha-Cha’, ‘Hari Om Hari’, and ‘Rambha Ho’ – I got passed over.

Bollywood did not give me many chances to do playback singing because there is a preconceived notion that a heroine should have a high-pitched voice. So, singers like Lata Mangeshkar, Asha Bhosle, K.S. Chitra, Sujatha Mohan or P. Susheela were preferred, instead of Begum Akhtar, Reshma and I, who have low bass voices.

It is strange: for example, [the late actress] Meena Kumari had a low bass voice, when you listened to her dialogues, but when she sang it was in the high-pitched voice of Lata Mangeshkar.

The secret of my long career is because I regard every show as a new one. I don’t take the musicians or the audience for granted. The song is always above you, even if you have sung it a million times. You have to approach it with a new sense of love and respect.

Every time I got a chance to do a concert or appear live, which was almost every second day it was a wonderful experience. Honestly, performing live is an addiction for me. And added to this, if I got a film song, whether it was in Tamil, Hindi or Malayalam, it was like a cherry on the icing of a cake.

Many people have asked me about the qualities needed to be successful. I reply that, firstly, you require a God-given talent. Thereafter, you have to train hard, whether you are doing Western vocals, Hindusthani or Carnatic music. You have to dedicate your life to music. You are not going to get a chance every day of your life to do something great or creative. So, it is important to hang in there, with a positive attitude, and know that the breaks will come some day.

Another question I am asked often is how has music changed over the years. Well, digital technology has made a big difference. It has made a lot of things easy, yet, at the same time, it has become mechanical. It is not warm as the old analog recordings. Some find the adaptations good, while many say it is bad. As far as I am concerned, change is inevitable. Without change, you cannot move forward.

(Usha Uthup is one of India’s most popular singers)