A magical evening of songs 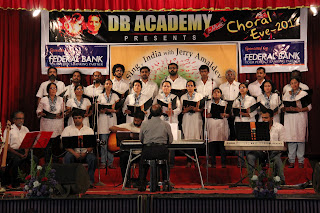 It is fitting that when Jerry Amaldev and his 'Sing, India chorus' begins the ‘Choral Eve’ programme on Independence Day, August 15, he begins with a rendition of ‘Vande Mataram’. It is the traditional song, and not the version as sung by Oscar winner AR Rahman.

There are 20 male and female singers wearing white and black and holding thick songbooks in their hands. As for the instruments, there are acoustics and bass guitars, a piano, keyboard and a rhythm composer. It is interesting to observe the age range: from a youngster with a mop of curly black hair to a grey-haired bespectacled man.

The choir begins with a couple of Malayalam songs: ‘Aana aana jana’, which was used in the Malayalam film, ‘Attappoovum nulli’, and a Christmas carol, ‘Shantham Prasantham’. This was followed by ‘Bum Bada Bum’. “It is a percussion sound made vocal by the singers and is an overture from the opera, ‘William Tell’,” says band member Joe Gabriel. “It is the sound of a man riding a horse and aiming an arrow at an apple placed on the head of his son.”

Meanwhile, Jerry takes the mike, and says, “I must congratulate this audience for their attentiveness. During many concerts, in my experience, the usual Kerala crowd talks about prawns and vegetables. Respect is not given to the people performing on the stage. Please understand that unknown songs are more difficult to enjoy, than known songs. But do listen with an open mind.”

And, indeed, one of the unknown compositions is a Filipino children’s song, ‘Bahay Kubo’, which is about vegetables. And this is confirmed by the English translation: ‘Palm hut, even though it is small,
The plants it houses are varied,
Turnip and eggplant, winged bean and peanut,
String bean, hyacinth bean, and lima bean.’

But it is not so unknown because in the audience a young girl tells her father, “Our Music Sir taught this in school.”

A striking song is the Negro spiritual: ‘Soon I will be done with the troubles of the world’. “Black people used to sing this song in church,” says Jerry. “Since they were treated worse than animals for centuries, when a person died it was a moment of celebration, because it meant the end of suffering any more injustices.”
The song was made world-famous by the great Gospel singer Mahalia Jackson. But the chorus sings it with equal fervor and the audience is enraptured easily.

They are also entranced when the group sings one of the most famous Jewish songs: 'Hava Nagila' (‘Let us rejoice’). The choir sings it loudly, with verve and energy, accompanied by a pulsating tempo. Of course, many singers have rendered this Hebrew song, including Bob Dylan, Glen Campbell and our very own Usha Uthup, but the most well-known was by Harry Belafonte, regarded as ‘The King of Calypso’. And he sang it slowly, without any music accompaniment, except for the soft sound of a tambourine.

Thereafter, Jerry lives up to the audience’s silent wish when, for his final song, he launches into one of his timeless hits, ‘Aayiram Kannumayi’, sung by Yesudas in the 1984 hit, ‘Noketha Doorath Kannum Natt’.

Jerry sings it, with felicity, and when he asks the audience to participate, a foreign girl in the front row gives a sheepish grin. But the crowd does sing along, a song that sounds as fresh as when it was released more than two decades ago.

Throughout the 17-song concert, Jerry is a master conductor at work. He guides the singers and the musicians with deft movements of his hands and nods of his head, breaking into an occasional smile. It is fascinating to watch how the singers are all focused on him and sing accordingly. The result is a flawless performance, made dazzling by the remarkable unison of all the voices.

As Fr. Raju Chakkanattu, the director of the Don Bosco Musical Academy, which organised the programme, says, “Thanks to Jerry Master and his team, we enjoyed a magical evening.”