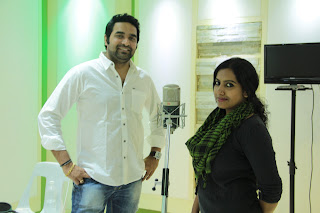 The song, ‘Appangal embadum’, from Ustad Hotel, released two months ago, has rocked Kerala and Malayalis all over the world. Composer Gopi Sundar and singer Anna Katharina Valayail talk about its success

Faizi (Dulquer Salman) puts on a jacket and sets out to attend a rock concert in Kozhikode. On stage is Shahana (Nithya Menon) wearing a cap at a jaunty angle, a jacket and jeans and black stiletto boots. She is surrounded by white-skirted dancers with face masks, and a band comprising men playing the lead and bass guitars, apart from the drums and the violin. There is a crowd of youngsters in front of the stage. Faizi has to jump on his toes to look at Shahana. As the intense riffs of a violin is heard, a bass voice starts singing, ‘Appangal embadum ottakku chuttammayi/Ammayi chuttathu marumonukkayi (Appam everywhere, Ammai is making it all alone/Ammai is making it for her son-in law).”

And the lyrics continue in this zany manner accompanied by this singular voice, which has a mix of insouciance, rawness, and something unforgettable about it.

Ever since it was released two months ago, this song, ‘Appangal embadum’, from the film, ‘Ustad Hotel’ has rocked Kerala and Malayalis all over the world. From toddlers to old people, they are listening to it all the time, made easy by the videos on You Tube, and being played constantly on FM radio channels.

Music composer Gopi Sundar is thrilled by the response. “The reason for its popularity is the simplicity of the song,” he says. “You don’t need to use your brain to enjoy it. Instead, it goes straight to the heart.”

The genesis of ‘Appangal embadum’ is interesting. For the rock concert, a song had been composed. But both director Anwar Rasheed and Gopi felt that they needed to lift it to another level. “We wanted a song that would attract the people and make them come and see the film,” says Gopi.

Sometime in March, Anwar send a SMS to Gopi with the first two lines of the song. Gopi looked at it and felt a spark of interest. But it was only a week later, while he had gone shopping at the Skywalk Mall at Chennai, with his friends, the music came unbidden to him. He immediately took out his mobile phone and sang the tune into the voice recorder.

He returned to the studio and worked on it, and got the basic tune. And when it came to selecting the singer, Gopi had no doubt about opting for Anna Katharina Valayil, who had sung a few advertising jingles for him.

“Anna’s voice is haunting and unforgettable,” says Gopi. “Since she is not a trained professional singer, she is very flexible. She can sing any way you want her to.”

When Anna came to the studio and read the lyrics, she was shocked. ‘There was no meaning to it,” she says. “I asked Gopi Sir, ‘What does it mean?’ He said it was inspired from an old Mapilla song. We will take the flavours from it.” He also said that it would be suitable since the band was based in Kozhikode in the film.

Gopi then said, “Anna, sing it like a rock song, but forget Bob Dylan and Jimi Hendrix. Do it in your own style.”

And so, it was that Anna belted out the song in her own highly individualistic style.

And when you speak to Anna, you realize that she is an interesting person. Having studied in Choice School, in Tripunithara, till Class 12, she did her BA from St. Teresa’s College. Thereafter, she did her masters in communication from Swinburne University in Melboure.

Following that she did a one-year course and got a certified Australian pilot’s license. Since the aviation industry was in the doldrums, in Australia, she returned to Kerala in 2010 and began helping her father in running the family homestay, ‘Vallis Gardens’ at Kalavoor, Alleppey. But all along she had harboured a secret desire to be a singer and received training from Sumesh Parameshwar, a musician who works with Gopi.

Asked why the song became a hit, Anna says, “The character Sahana, who sang the song in the film, is a bold person even though she came from an orthodox Muslim family,” says Anna. “If Shahana was not fearless, then my voice would not have matched it.”

But surely it is that unique voice that made all the difference. Asked to define herself, Anna says, “I am bold and impulsive. A Gemini, I have more than five voices in my head. I am multi-faceted. I love to sing and ride motorbikes. And now, I want to make a mark in singing.”

But through ‘Appangal embadum’, Anna has already made a mark.