A Big Bang for the Big B 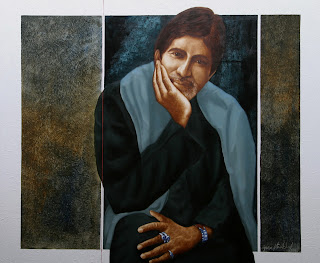 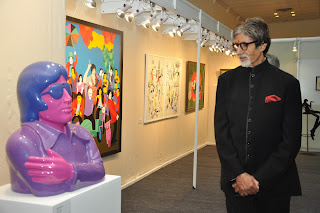 Malayali artist Yusuf Arakkal, among 70 notables, pays tribute to Amitabh Bachchan on his 70th birthday with an art exhibition at Mumbai

Photos: Painting of Amitabh Bachchan by Yusuf Arakkal; Bachchan viewing a fibreglass work of himself by  HG Arun Kumar

Four months ago, Malayali artist Yusuf Arakkal got a call. It was from the Mumbai-based curator Sapna Kar. She commissioned a painting on Amitabh Bachchan to be unveiled at an art exhibition on October 12, a day after the iconic actor turned 70. “He is one of the great actors that India has produced,” says Yusuf. “Being an artist, I thought this would be the best way to pay a creative tribute.”

For research, Yusuf referred to Mumbai journalist Khalid Mohammed's book on Amitabh, titled, 'To Be Or Not To Be'. “I liked a photo that was taken ten years ago,” he says. “It was the time Amitabh had started growing his white beard. It made him look benign.”

The oil on canvas, 5 x 4 ft., shows Amitabh, with a goatee, wearing a dark blue suit. There is a shawl placed across his shoulders, and his face is resting in his palms. Amitabh looks placidly at the viewer. On his left hand, which is resting on his knee, are a few rings.

Yusuf was one among seventy artists who were paying tribute to Amitabh. Says Sapna: “The idea was conceptualised by Jaya Bachchan and adman Piyush Pandey. They wanted to give a birthday gift that was different. Since both Jaya and Amitabh are lovers of art, Jaya felt that what better way than to give an artistic tribute to a man who is himself such a great artist?”

At the exhibition, held at the Nehru Centre art gallery, Mumbai, an excited Amitabh called up Yusuf in Bangalore. “Amitabh told me he liked my painting a lot,” says the artist, who could not attend, because of a prior engagement. “He kept saying 'Yusuf Sir' and I got very embarrassed. It gives you an indication of his humility. I told him we have a common friend – Mohanlal – and he was very happy to hear that.”

Among the people selected, Sapna looked for versatility. “Some were young and old, while others were modern and contemporary,” she says. “They specialised in different medium like painting, sculpture, photography, and mixed media.” Some of the eminent artistes included Anjolie Ela Menon, Akbar Padamsee, Badri Narayan, Satish Gujral, Gieve Patel, Manu Parekh, Paresh Maity and Arzan Khambhatta.

Khambatta's sculpture depicts Bachchan on the 'KBC chair', which he has called 'The Throne'. It's the artist's representation of how Bachchan's career got a fresh boost after the success of the quiz show, 'Kaun Banega Crorepati'.

Artist Farhad Hussain depicts Amitabh in his various roles in his brilliant film career. So, there he is as Antony Gonsalves, with a black top hat and long coat-tails, in the film, 'Amar, Akbar, Antony'. In another section, he is driving the three wheeler motorcycle from the iconic scene from 'Sholay' when he and Dharmendra sing 'Yeh Dosti'. But in the painting, in a clever touch by Farhad, instead of Dharmendra in the side seat, it is Amitabh in his role as the bald-headed 'Pa'. On the left, there is Amitabh as the 'Coolie', with suitcases on his head, and wearing the familiar red tunic of the porter.

"The painting displays Amitabh's various roles, acting, and his looks over the years,” says Farhad. “All the figures reveal his greatness as an actor and a good human being. Depicting his acting and life in one painting is impossible."

Veteran artist Satish Gujaral has done a mural-style image of Amitabh holding a string with a couple of kites at one end and a ball of string at the other. “Watching Amitabh on screen has always made a deep impact on me,” says Satish. “The impression has been one of a person who did not just act the character, but was able to sink into his pores. Having lost my hearing, watching him play a teacher of a deaf, mute, and blind girl in 'Black' was something I simply cannot forget.” Other works which caught the eye include a fibre-glass version by HG Arun Kumar of the young Amitabh, wearing black goggles and having shoulder-length black hair.

At the exhibition, which was inaugurated by Kokilaben Ambani, many notables were present including industrialists, Anil Ambani and Kumaramangalam Birla, socialites like Parmeshwar Godrej and Ramola Bachchan, film director Govind Nihalini and veteran actress Deepti Naval, and, not to forget, Abhishek and Aishwarya Bachchan.

Apart from the art show, a coffee table book, 'B Seventy' has been brought out. A part of the proceeds will go to the NGO, 'Plan India' which provides quality education for the girl child.