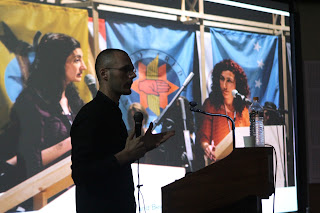 Dutch artist, Jonas Staal, talks about the conflict between people and governments and how banned organisations are quietly pushed outside the ambit of democracy

In Holland, in 2010, a right-wing government took power. This government frontally attacked art by calling it a left-wing hobby and propaganda. And the result was cuts in the budget for arts by 200 million Euros. “This resulted in a protest,” says Jonas Staal, a Dutch artist, who was giving a ‘Let’s Talk’ lecture at Kochi, on an invitation by the Kochi-Muziris Biennale.

A group of artists took out a march from Rotterdam, called the ‘March of Civilisation’, till they reached the Parliament in The Hague. “What was interesting was the peaceful nature of the protests,” says Jonas. “There is a constitutional right in the Netherlands that one can protest as long as there is no violence. But, to the surprise of the marchers, the riot police suddenly attacked them. Because of that, there were other protests and questions to the municipality as to why the artists were attacked.”

The Mayor of the Hague, Jozias van Aartsen, said that the protest was not a problem. The issue was the space where the protest was taking place. All around are numerous shops. And people wanted to go to the shops. But because of the protesting artistes, they could not do so. “So we decided to intervene, because the right of the consumers to buy products was blocked,” said Jozias.

Adds Jonas: “In this example we can see the enormous difference between the two powers [the state and people], both stating that they are defending the ideals and principles of democracy. But the moment they meet it becomes clear that they are fundamentally opposed to one another.”

Nobody will publicly state that they oppose human rights, freedom, equality and diversity. “But when we start talking in depth about what are the types of freedom and equality then differences emerge,” says Jonas.

Soon after the failed protest, through a group that Jonas belongs, 'Social Experiment', they invited senior police people to lecture to a group of artists and students at a national art school. “We wanted to understand how violence is enacted by the state,” says Jonas.

The police director explained about the types of situations where it is legitimate for the state to apply violence. “The director explained how the riot police had to analyse and evaluate a violent situation and then isolate the subject who is creating the problem,” says Jonas.

In three days of discussions, both artists and the police had a better understanding of each other. “There was a level of intimacy which usually never happens between a state and its citizens,” he says.

Jonas is keen for a more intimate understanding of people, democracies, and systems. In May 2012, he came up with an extraordinary concept: 'The New World Summit' at Berlin or an alternative Parliament. He invited political and legal representatives of organisations which have been placed on international ‘terrorist lists’ to explain their points of view.

Some of the people who spoke included Luis Jaladoni of the New People’s Army of the Philippines, Fadil Yildirim of the Kurds, lawyer Nancy Hollander representing the Holy Land Foundation, which supposedly has links with Hamas, the banned Palestinian group, Moussa Ag Assarid of the Tuareg People’s Right to Self-Determination and Linda Moreno a lawyer who represented Sami Al Arian, a Muslim activist, who is a US citizen and accused of links to Muslim terrorist organisations.

What happens when you are placed on such a list? “You are regarded as a state threat, and a danger to stability,” says Jonas. “Subsequently, you are pushed outside of democracy. As a result, your bank accounts are frozen and there is an immediate travel ban.”

This has happened to Julian Assange of Wikileaks. Although he has been given political asylum by Ecuador, there is a travel ban on him and he cannot leave Britain. And his organisation, Wikileaks, is unable to function. “Those who want to donate to Wikileaks are unable to do so,” says Jonas. “They are blocked by Paypal and Visa. You cannot build a political organisation when these simple means are removed. This is the way power effectively blocks out radical movements.”

Jonas has another reason to hold the summit. “True democracy is limitless,” he says. “It does not mean that it supports violence, but it means that all political positions, no matter what your background is, should be heard at all times without any exception. I wanted to create a space where banned political organisations have a platform to talk about their aims and their untold political histories.”