“Thomas is a soft-spoken man” 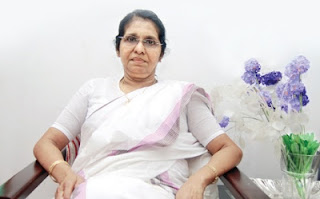 Sherly talks about her life with Union Minister K.V. Thomas

It was in January 1970 that Sherly Bernard met K.V. Thomas, the Union Minister of State for Agriculture, during an official 'marriage seeing' visit. “I cannot recall what he wore that day,” she says. “But the striking memory for me was how lanky he was.”

The marriage took place on April 12, 1970, at the St. Antony's Church at Vaduthala, Kochi. Very soon after that, Thomas made an adjustment which made Sherly very happy. “My mother suffered from rheumatoid arthritis and needed to be looked after,” says Sherly. “When my father asked Thomas whether he would stay at our house, he agreed. That made me feel proud of him.” At that time, Sherly's only other sibling, Jojo, was studying at Law College in Kozhikode.

In more than 40 years of marriage, Sherly likes the fact that Thomas is always soft-spoken and rarely gets angry. “When there are problems Thomas has an attitude of wanting to solve it in an amicable manner,” says Sherly. “As a politician, he has been able to get along with everybody across the political spectrum.”

Thomas began his career as a teacher of chemistry at Sacred Heart College in Thevara in 1968. “As the wife of a professor, it was a quiet life and there was no tension of being in the spotlight,” she says. “In those days, Thomas also had the time to teach chemistry to our children.”

The couple has three children: Biju, Rekha, and Joe. But once Thomas won the Parliamentary election in 1984, from Ernakulam, he took to politics as a career and, subsequently, could spare very little time for the family. “The children, especially Rekha and Joe, would miss him at times,” she says. “He would come very late and sometimes, leave early in the morning. So the children would not see him at all.”

Meanwhile, Thomas has a negative trait, which brings a smile to Sherly's face. “He can become absent-minded at times,” says Sherly. “As you talk to him, you suddenly realise he is no longer listening to you.”

Like in any life, there have been high and low points. One high point for Sherly was when she accompanied her husband to two trips to the Vatican. One was for ‘the elevation to sainthood’ ceremony of Sr. Alphonsa, in August, 2008, while the other was when Major-Archbishop George Alencherry was installed as a cardinal at St Peter's Basilica in February, 2012.”Both were wonderful experiences,” she says.

But the low point was reached when Thomas was implicated in an espionage case in 1996 and accused of supporting a French team to do an ocean survey without proper authorisation. “My husband told me, 'I am a truthful man, so how can I betray the country?'” says Sherly. “It was a painful time for me.”

Because of the case, Thomas resigned from all posts within the Congress Party and withdrew from politics. Thereafter, he rejoined the chemistry department of Sacred Heart and for six years, he remained a teacher. In 2001, he retired as Head of the Department, after serving the institution for 33 years. During this period, he was exonerated of all charges, stood and won the Assembly elections in 2001 from Errnakulam.

Anyway, Thomas's career took off and he is now a Union Minister. “I could never imagine that one day my husband would hold such an important position,” says Sherly.

At their house in Thoppumpady, there is a constant stream of visitors to see Thomas. And Sherly is also in demand. As she talks, a group meets her to give a wedding card. A wedding during these times when youngsters seem unable to get along once they get married. So, what is her advice for newly-weds? “The only way to have a successful marriage is to adjust,” says Sherly. “There will be many issues which will crop up. Husband and wife come from different families and have contrasting personalities. But once the spouses learn to adjust, things will fall into place.”

K.V. Thomas is the Minister of State in the Ministry of Agriculture and Minister of State in the Ministry of Consumer Affairs, Food and Public Distribution, Central Govt.. He is the MP from Ernakulam and a member of the All India Congress Committee. Earlier, he was the Minister for Excise and Tourism and Minister for Tourism and Fisheries between 2001 and 2004 in the state government. Thomas, who holds an MSc degree in Chemistry, has written six books.

(The New Indian Express, Kochi and Thiruvananthapuram)
at October 16, 2012