At home with the Home Minister 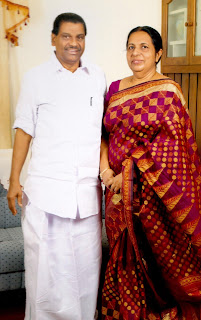 Lalithambika Pillai first saw Thiruvanchoor Radhakrishnan in 1973 when she joined the Law College in Thiruvananthapuram. At that time, he was the president of the Kerala Students’ Union, while Lalithambika was a member. “In those days, out of 100 members, there would be only 25 women,” she says. They interacted often. And soon, Radhakrishnan developed feelings towards her.

One day he told her he had written a letter, which he had sent to her hostel address. But when Lalithambika read the missive, it was filled with general topics. “That was when I got a hint about his interest in me,” she says. Finally, he proposed. And Lalithambika said yes. Through a cousin, Ravi Kumar, who studied in the same college, her parents were informed. They were not enthusiastic. “My parents were apprehensive because Radhakrishnan was into politics,” she says. But they eventually agreed.

The marriage took place in Kottayam on April 28, 1977. And over the years, what Lalithambika appreciates the most about her husband is his punctuality. “If he has to reach somewhere at 4 p.m., he is ready by 3 p.m.,” she says. “He is very sincere in his work. On this aspect he is different from other politicians. He will never switch off his phone. At 12.30 and 1 a.m., I have heard him speak to police officers. If there are major accidents or deaths, they can get the Home Minister on the phone. Even when he is shaving, he is holding the phone next to his chin. My husband is a full-time politician.”

As a result, Radhakrishnan is unable to be involved in the day-to-day running of the household. “Sometimes, he has very little idea of how the house is running so smoothly,” says Lalithambika. “In the initial years, his absence was tough for me. When the children fell sick I had to take them to the doctor. For many parent-teacher meetings at school, I went on my own.”

Lalithambika worked for 33 ½ years in Nedungadi Bank and after it was merged with Punjab National Bank in 2002. She retired on April 30, 2012. “Because of a steady income we were able to bring up the family,” she says. This includes Anupam, 33, Athira, 29, and Arjun, 27.

However, despite his busyness, Radhakrishnan did set aside time now and then for his family. “We would go for excursions and films,” says Lalithambika. “But ever since he became the Home Minister, he has become exceptionally busy.”

Whenever he is at home in Kottayam, Radhakrishnan gets up at 5.30 a.m. and reads the newspapers for half an hour. Then he has a bath. By this time, people have already started arriving at the house in Kodimatha to meet him. Lalithambika prepares a small snack at 7.30 a.m. He will leave by 9.30 a.m., but will make sure he has met everybody who has come to meet him. Then he will go for his daily programmes and return by 11 p.m. “By then there are more people in the house, waiting to meet him,” she says. “Only after he has seen off the last visitor does he enter the house. That may be at midnight.”

And sometimes plans can be changed at the last moment. On a recent weekend, Radhakrishnan came in at 11.30 p.m., met a few people, had his dinner, and left for Thiruvananthapuram at 12.30 a.m., because of an early morning meeting the next day. “I hardly get any time with him,” says Lalithambika. “And even when he is at home, most of the time, he is talking on the phone.”

So, it was no surprise that one of Lalithambika’s happiest memories was when she went for a ten-day trip to America with Radhakrishnan to be with their son Anupam in Mississippi in 2005. “My husband and I were together for long periods of time,” she says. “We went to New York, Chicago, and Florida.”

But, nevertheless, people still called Radhakrishnan from Kerala because he was the minister of Water Resources, Forests, Health and Parliamentary Affairs. “My husband would often be reminded of his work while in the USA,” says Lalithambika.

So, what are the advantages of living with a powerful man? “There are no significant advantages for the family just because Radhakrishnan has power,” says Lalithambika. “My children and I lead an ordinary life. We have had the same lifestyle for the past 25 years. Perhaps, nowadays, because he is the home minister, I have stopped going to the local shops to buy things, as I used to do.”

When asked for tips to have a successful marriage, Lalithambika, says, “For the sake of the family the girl should be one step below. I know this will not be popular among many of the young working women these days but this attitude helps to have a successful marriage. I am against feminism. You must respect a man, instead of attacking him all the time. When a woman tries to take the upper hand, it leads to unhappiness and sorrow in the family. I know of many cases like that.”