Being multi-dimensional is the way forward 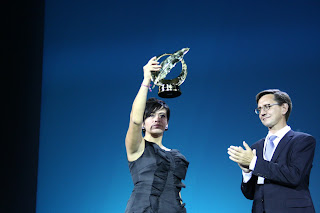 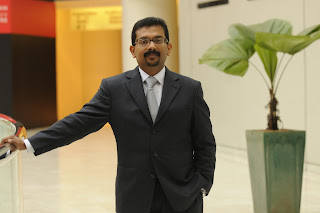 Kochi-born Thomas Jacob, the Chief Operating Officer of WAN-IFRA, an international organization of newspapers and journalists, talks about the future direction of the media
Photos: Mexican journalist Annabel Hernandez receiving the Golden Pen of Freedom award; Thomas Jacob
By Shevlin Sebastian
“Every morning I open my eyes on a burnt-out country, where, in six years, more than 60,000 people have been executed by the government or organised crime,” says Mexican journalist Annabel Hernandez. In December, 2010, when her book ‘The Drug Lords’, was published, she was sentenced to death by officials of the Ministry of Public Security. “Every day I live with this weight in my heart, never knowing when my time will be up,” she says.
This is an excerpt of Annabel’s acceptance speech when she won the Golden Pen of Freedom awarded by the international news organisation, the World Association of Newspapers and International Federation of Journalists and Editors (WAN-IFRA).

“In prestige, it is equivalent to the Nobel Prize,” says the Kochi-born Thomas Jacob, the Chief Operating Officer, while on a brief visit to Kerala. “Annabel got the award at a huge Congress held in Kiev, Ukraine. This award has enabled her to be in the international spotlight, so this could protect her life.”

One of WAN-IFRA’s primary roles is to protect the freedom of the press. The organisation represents more than 18,000 publications, 15,000 online sites and over 3,000 companies in more than 120 countries. The group is based in Paris, with subsidiaries in Singapore, India, Spain, France and Sweden. From his base in Singapore, Thomas travels all over the world. And so he has first-hand perceptions of the state of the media.

“In the developed world, print is suffering,” he says. “Newspapers will have to think differently. Many of the companies have gone online: audio, video, and web sites. But the revenue they earn is not good enough. It is lower per reader than it is in print. So you need to look at a new business model. Unlike the past, the audience is fragmented. There is no longer a mass of readers. You need to create a portfolio of products that will suit different consumers. This is the phase that most of the newspapers are in this moment.”

Some have already made the move. One of the largest media companies in Europe is Axel Springer of Germany, which has 160 newspapers and magazines. “They have identified the areas they want to be strong in, like finance, cars, sports, marketplace, and jobs,” says Thomas. “Then they target the readers in each segment by providing information through print, online, tablets and mobile phones As a result, they have become very successful.”

Being multi-dimensional is the way forward. One reason why print is declining in importance is the way people consume news.

“In many cities, like Singapore, where Wifi is free, people read the news on the Ipad, mobile, and the tablets,” says Thomas. “Tablets offer much more than print, which is one-dimensional. On a Tablet, you can have audio, video, picture galleries and animated graphics. And the best part about the tablet is that it is so portable.”

Meanwhile, in India, the dominance of print continues. “Groups which have launched regional editions will continue to grow,” says Thomas. However, he is worried about the pricing of Indian newspapers. “It is cheaper than a cup of coffee,” he says. “Because of the intense competition the price is not going up. At the end of the month you can sell the papers to the second-hand shop. So, in effect, the newspaper is virtually free for the consumer.”

From the publisher's perspective it is risky, because the revenues are based on advertisements. “The circulation income is less than 20 per cent, while the rest is got from advertising revenue,” says Thomas. “So, if there is a downturn in the economy, newspapers are affected immediately. In developed markets, the circulation and advertising mix is 50-50. In India, it is skewed too much towards advertising.”

Despite that, the future looks promising, because the number of readers per thousand is very low. “In Europe, it is 218 copies and in America it is 182,” says Thomas. “But in Asia, including India, it is only 128. So this number can go up, through planned marketing initiatives.”

Fast Facts:
2.5 billion people read a newspaper regularly
Asia has seen circulations grow by 16 per cent in the last five years, driven by sales in China, India and Indonesia

67 per cent of web users in the United States of America say they visit a newspaper website, but only 17 per cent visit each day. This is because the 'lean-forward' way of consuming news on desktop computers is not the best environment for reading.

(The New Indian Express, Kochi and Thiruvananthapuram)
at January 12, 2013