Life with a goal-scorer 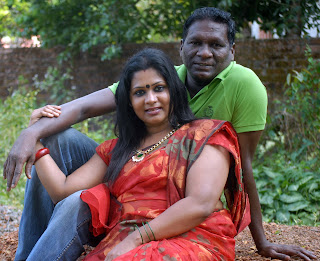 Raji talks about her marriage to former footballer IM Vijayan


On January 27, 1992, Raji went to attend the Sree Murugan festival at the KoorkencherryTemple at Thrissur. Footballer IM Vijayan was also there, along with his friend Jayan. Raji’s father went to greet him. And when Vijayan saw Raji, he was immediately smitten. At that time, Raji was only 16, while Vijayan was 23. Through Jayan, Vijayan expressed his desire to marry Raji.

“I had read about Vijayan in the newspapers,” says Raji. “A Malayalam newspaper presented him with the Golden Boot for being the best footballer in the Santosh Trophy.” But because of their youth, it took a while for the couple to get engaged.

Since Vijayan was busy playing football all over the country, Raji stayed in touch by making trunk calls every evening. She would go to the telephone booth accompanied by her mother. “I would speak to Vijayan for two hours or more,” says Raji. “The telephone bills were quite high.”

The engagement period lasted for two years and, during that time, Raji saw Vijayan for less than 10 days. “Once he was injured and spent five days at the Co-operative hospital in Thrissur,” says Raji. “Otherwise, he was busy all the time.” But Vijayan did miss Raji. So, in those days, even though the flight charges were very high, Vijayan would still try to come and spend a day with Raji.

Eventually, the marriage took place at the Tiruvambadi Sree Krishna temple in Thrissur on August 18, 1994. But there was no time to go for a honeymoon. The couple headed to Gangktok in Sikkim where Vijayan was representing Mohun Bagan in the Governor’s Gold Cup. While there, the couple took the opportunity to visit the school where ace footballer Bhaichung Bhutia had studied in: the Tashi Namgyal Academy.

Thereafter, Raji watched Vijayan play in different places. “I have attended matches in Bangalore, Mumbai, Hyderabad, Chennai, Delhi, and Chandigarh,” she says. “In fact, sometimes, I was the only woman in the stadium.” The one place she did not see the games was at Kolkata. “The crowds were so huge that I was afraid to go to the stadium,” she says.

For her the most memorable moment occurred when Vijayan scored one of the fastest international goals, in 12 seconds, during India's match against Bhutan at the 1999 SAF Games in Kathmandu. “It was when the national coach Sukhwinder Singh informed Vijayan that we realised that he had set the record,” says Raji.

Undoubtedly, her husband is an exceptional person. But what Raji likes most about Vijayan, apart from his footballing skills, is his happy-go-lucky mind-set. “I have rarely seen him feel low,” she says. “On the other hand, I am a moody person. But when I get angry Vijayan reacts in a cool manner.”

What Raji also finds admirable is her husband's phenomenal memory. “Vijayan is a person who never forgets anybody he has met,” says Raji. “And he behaves in the same manner with all.”

It had been a tough time for Raji for many years because Vijayan was rarely at home. “After his club duties were over, he would have to play for the country,” she says. So Raji managed the household and brought up the three children – Archana, 17, Aromal, 15, and Abhirami, 12 – on her own.

But things have changed ever since Vijayan retired from football in 2004. “Now he is able to devote more time to the family,” says Raji. “And the most amazing thing is that in the last two years, he has learnt cooking. Clearly, he has a talent for it, and makes tasty non-vegetarian dishes.”

They have a steady life now. But whatever time Vijayan goes to sleep, be it midnight or 4 a.m., he always gets up at 6 a.m. “That is his strength,” she says. “He is a disciplined person.”

Vijayan then sets out to play in a stadium at Thrissur. He returns at 9 a.m., has his bath and breakfast, and sets out to Ramavarmapuram, one hour away, in his Innova car.
Vijayan is a Circle Inspector of the Kerala Police. He returns by 1 p.m., has lunch, and takes rest for two hours. Then at 3.30 p.m., he returns to Ramavarmapuram where, thanks to the initiative and encouragement of top police officers, B. Sandhya and P. Vijayan, he is running a football camp on the grounds belonging to the Commissioner of Police.

There are 350 students, from 7 to 14 years, who are receiving coaching. Vijayan returns at 7.30 p.m., spends time with the family and sometimes, he goes out.

Thanks to his celebrity status, Vijayan is invited to take part in functions all over Kerala. “Sometimes, we accompany him,” says Raji. “Wherever he goes he receives a lot of respect. I feel happy about that.”

Vijayan started out as a seller of soda bottles in Thrissur, earning 10 paise a bottle. He had a passion for football, and caught the eye of M.K. Joseph, the then Director General of Police, who got him selected for the Kerala Police football club at the age of 17. Vijayan played brilliantly for the police team at the Kollam Nationals in 1987 and made an impact. Thereafter, there was no looking back.

Later, Vijayan played for Mohun Bagan, JCT Mills, Phagwara, and FC Kochin.
Vijayan represented India in the Nehru Cup, the pre-Olympics, pre-World Cup, South Asian Football Federation Cup and South Asian Federation Games. Vijayan and Baichung Bhutia formed a deadly combination. In 79 matches Vijayan scored 40 goals. He was the Indian Player of the Year in 1993, 1997, and 1999, and won the Arjuna Award in 2003.