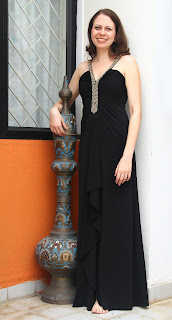 At a Christmas party in San Francisco, in 1997, Evgeniya Liuban, who has a masters degree in classical music, was playing the piano and singing hit songs of singers like Stevie Wonder, John Lennon, Boney M, and Barbra Streisand. Sometimes, she would play the classical tunes of greats like Frederic Chopin, Franz Liszt and Ludwig Van Beethoven. Suddenly, a man walked in, wearing a T-shirt and jeans. “I felt an immediate attraction,” says Evgeniya. “His appearance was different. He was tall and looked powerful. And there was something mysterious about him.”

After her performance they started talking. Evgeniya was accompanied by her aunt, Maria, who knew the relatives of actor Babu Antony. At the end of the party, Babu asked her out for a date. Two days later, they went to a Chinese restaurant. Thereafter they went for regular outings, walking along the San Francisco Bay area, and spending time on beaches. “I had seen Indians before, but it was the first time I was talking to one,” says Evgeniya.

In the next few weeks, Babu began to drops hints of marriage. “Once he showed me a family photograph and pointed at himself in the photo, and said, 'This is your future husband,'” says Evgeniya, with a laugh. Finally, he proposed. They applied for a licence to get married in California. A wedding gown was selected. But suddenly Evgeniya felt unsure. It was all going too fast.

She flew back to Moscow to talk to her father, Gregory. Her mother had died, years ago, of blood cancer at age 42. “I told my father that an Indian wanted to marry me,” says Evgeniya. “He was shocked. He said it is such a different culture. The people are different.”

Meanwhile, Babu was calling Evgeniya three times a day. Finally, Babu landed up at Moscow, met Gregory, his second wife, Natalia, Evgeniya's brother, Vladislav and their grandmother, Sofia. “My dad liked Babu,” says Evgeniya. “My family said he was a good man but they were not sure whether I should get married to him so soon. They told me to wait for a while.”

The registered marriage, in Moscow, took place on January 14, 2004. Initially, they stayed in America, then in Babu's family home in Ponkunnam in Kottayam district, and now they live in a 16th floor apartment in Panampilly Nagar at Kochi.

Asked about the qualities she likes about Babu, Evgeniya says, “He is sincere and honest and it is easy to be with him. Babu rarely pretends. He never shows off even though he is in movies and is well known in Kerala. He is kind and always supports me.”

But sometimes, Evgeniya does get irritated when Babu gets involved with his work. “His mind is full of his projects,” she says. “He walks around in the house, and does not notice me. He should be more attentive.”

On most days, Babu gets up at 6 a.m. His first job is to keep an eye on their two-year- old son Alex, while Evegniya gets their elder son, Arthur, 7, ready to go to school. After that, the couple has breakfast. “Babu usually has oats and fruits,” says Evgeniya. In the morning, Babu does errands for the house, and works on the computer on his plans for his first directorial venture, 'Piano'.
Interestingly, Evgeniya has sung an English song, 'Bud of Love', for the film.

For lunch, the couple eats Kerala and Russian food. Regular Russian items include the Kartoshka, which is made of mashed potato, butter, milk, and salt, and the Golubzi, a cabbage leaf preparation, with meat, rice, and onions. “We Russians usually have coffee after our meals, but Babu smiles and says no,” says Evgeniya.

In the afternoon, Babu takes a nap, and later, he goes to the gym, which is located in the apartment building in which they live in. Sometimes, the family goes swimming in the building pool, or they go jogging at the Rajiv Gandhi Indoor Stadium. At night, Babu goes out to meet people from the film industry.

And, slowly, over the years, Evgeniya has gotten used to life in Kerala. “In the early years, because of homesickness, I would go every six months to Moscow,” she says. “Now it is once in two years.” Incidentally, Babu does not know Russian, Evgeniya does not know Malayalam, so they communicate in English. But the children speak Russian, English and Malayalam fluently.

Asked for tips for a successful marriage, Evgeniya says, “There should be constant communication between the spouses. If there are problems, it should be solved by talking, instead of fighting. There should be trust between husband and wife. Without trust the marriage will be ruined. When things get boring, you can go for vacations, to renew the marriage.”

Bharatan, a well-known director, introduced me to movies. I have done over 175 movies in five major Indian languages (Malayalam, Hindi, Tamil, Telugu and Kannada) playing a wide range of roles including as hero and supporting actor. I have just finished filming for 'Buddy' in Malayalam. Will start shooting for 'Moonnam naal Jnayar' (3rd day is Sunday). Some of the hits in recent times in which I have acted in include Gautam Menon's 'Vinnai Thandi Varuvaya in Tamil, remade in Hindi as 'Ek Deewana Tha', and 'Kanchana' by Lawrence Master in Tamil, Telugu and Kannada. My last Malayalam super-hit was 'Grandmaster'.
(From www.babuantony.com)