A Whole Lot Of Crosses 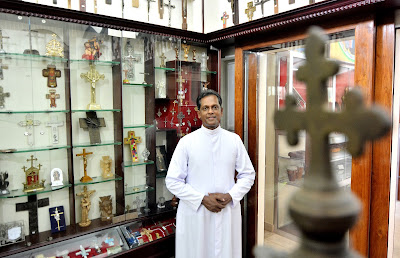 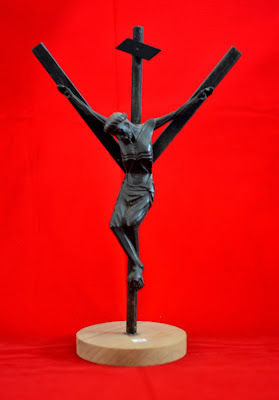 The St. Thomas Christian Museum, at Kochi, is a repository of 800 crosses, as well as historical items like drums, music instruments, and farming implements

One of the striking memories of Fr. George Alunkal's childhood was to see his great-grandfather, T. Ulahannan, walk about, with a large metal cross, around his neck. “Sometimes, it gleamed in the sunlight,” he says. “Whenever I looked at him, my eye would always go to the cross.”

When Ulahannan passed away, the cross was given to Fr. George's grandfather, who later gifted it to him when he decided to become a priest in 1972.

“I have been fascinated by crosses ever since,” he says. And it was during his days at the seminary that he began collecting crosses. Soon, other priests came to know about his hobby. “When any of them went abroad, they would bring me crosses,” says Fr. George. “When I went abroad myself, I would always be on the lookout. Invariably, when I returned, my suitcase would be full of crosses. I received most of them as gifts, but did purchase some antique crosses.”

Over the years, Fr. George steadily built up his collection, till it reached the staggering number of 657. The crosses were stored in two large cupboards in his vicar's room at the Cathedral Church in Kanjirapally. “I am growing old,” says the 66-year-old. “So, last year, I decided to donate it all to the St. Thomas Christian Museum at Kochi.”

And, indeed, at the Museum, the crosses present a pleasing sight. “There are all types of crosses,” says Dr. Peter Kannampuzha, the museum director. “They are made of porcelain, wood, metal, glass and crystal.” And the crosses have been brought from countries like the USA, Germany, Italy, Greece, Ethiopia, Iran, China and Indonesia.

The majority of the crosses show Jesus Christ on the crucifix. “But He is depicted differently,” says Fr. Peter. “So there is a black, white, and brown Jesus. Usually, the face is modelled on a local person. In societies where there are a lot of poverty and suffering, like in Africa, Jesus is portrayed as having a tragic face. In India, Jesus is mostly depicted in a joyful way because after he died, he had a resurrection. So they wanted to focus on that.”

Some crosses are unusual. There is one cross in the form of a tree, with a flower. “The flower shows the blooming of the earth after the death of Jesus,” says Fr. Peter. There is another where Jesus has been portrayed as a skeleton on the cross.

The museum has also got crosses donated by a lawyer, Jacob Cherupallikattu. “These include Papal, Cardinal and Patriarchal Crosses,” says Fr. Peter. All the crosses have been neatly displayed in wooden glass-framed cupboards.

The museum has been set up by the Syro-Malabar church, the largest branch of Christians in Kerala. “The aim of the museum is to promote, preserve and exhibit the heritage of the Thomas Christians in India,” says Cardinal George Alencherry. “It provides us with a sense of identity.”

So, apart from the crosses, there are 300-year-old farming implements, a traditional press, large clay jars, candlesticks, several types of lamps, old music instruments, traditional paintings and icons, as well as a huge Royal drum.

“This was placed on a bullock cart, and four people would bang on it,” says Bishop Pauly Kannookadan, chairman of the museum. “It was used for grand festival processions in the northern part of Kerala. Just before the king made an announcement, the drums would be played, to draw the attention of the crowd.”

There is also an audio-visual programme which narrates the history, from St. Thomas's arrival at Kodungallur, in 52 AD, all the way to the present. There are rare coins and books. One book is the 'Varthamanappusthakam', a Malayalam travelogue written by a priest called Paremmakkal Thoma Kathanar. “It is regarded as the first travelogue in an Indian language,” says guide Sr. Mereena. “It tells the story of a journey made by the author, along with Archbishop Mar Joseph Kariattil, to Rome and back.”

Nevertheless, it is the crosses which are the museum's most attractive feature. Ironically, Fr. George is yet to view the collection in the museum. “I am hoping to do so in the near future,” says the priest.