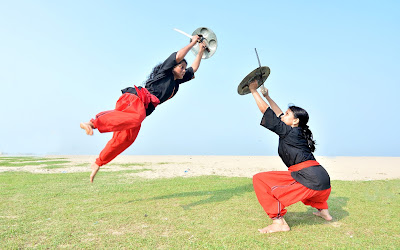 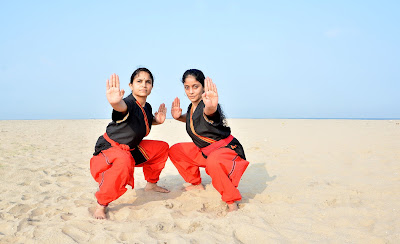 The lack of popularity of Kerala's greatest martial art form, Kalaripayattu, in the home state, has made two women practitioners set out on a mission to revive it

By Shevlin Sebastian
At 2.30 p.m., one day, Rosa Varghese was walking down a road, with her daughter, Anna, who had just returned from school. From the opposite direction, Rosa saw two youths on a bike. As they came abreast, the pillion rider grabbed at Rosa's neck, assuming there would be a necklace. But Rosa was not wearing one. The pillion rider shouted to his friend, “Speed up”, but in a swift reflex action, Rosa grabbed him by the collar and pulled him down. He lay spread-eagled on the road, while the rider rode off.

Onlookers immediately rushed the spot. The police were called. And the youth was handed over.

“At that moment, I thanked [the art form of] Kalaripayattu,” says Rosa. “It was because of my training that I could react so fast.”

Rosa is the Kochi-based wife of a plantation owner. While searching for some exercise for her children to do, she stumbled upon Kalaripayattu. Now, along with her children, Varkey and Anna, and some friends, she has been training twice a week, under the tutelage of Sivankutty Asaan, a Kalaripayattu teacher, for the past eight years, at the Rotary Bal Bhavan centre at Kochi.

And Rosa is a transformed person. “Kalaripayattu is much more than fitness and losing weight,” she says. “It fosters well-being. And it empowers you. When I walk on the street I am not afraid at all. The usual reaction of women is to cower during times of danger. But through Kalaripayattu, I have learned how to block a blow.”

Her colleague, Sajitha Menon, the wife of a finance manager, agrees, “Earlier, I had been timid. Now I feel bold. Kalaripayattu has also taught me patience and calmness.”

But what is breaking their hearts is that very few people are learning Kalaripayattu. “This is one of Kerala's oldest martial arts form,” says Sajitha. “But people see all these fights, with swords, on television and think it is a violent sport. But that is not true at all."

Says Sivankutty Asaan, “Kalaripayattu has been a science that has been perfected over many centuries. Unfortunately, it has been reduced to an item number in films. It is a cultural loss.”

To combat this loss, Rosa and Sajitha are on a mission to popularise it. Last April, the duo held a 20-day programme, open to all, at St. Teresa's College. Participants included a grandmother, a housewife, school and college-going students. “A few of them continued after it was over, for a while, but then studies and other issues came up,” says Rosa.

A few days ago, they attended a women's forum meeting held at entrepreneur Madhu Babu's house at Kochi. "We spoke about the benefits of Kalaripayattu," says Rosa. "Many of the women were receptive." Says participant Dr. Lakshmi Babu, “I always felt that Kalaripayattu was difficult to do,” says Lakshmi. “But Rosa and Sajitha have convinced me otherwise."

The duo has appeared on radio shows and television channels. They also gave a talk to a women's group at the Rotary Club (Milan). At an alternative lifestyle centre, they put up a notice board promising to conduct classes for those who are interested.

The pair had an eye-opener while taking part in the district as well the national championships held at Kochi in August. "The organisers, contestants as well as the coaches spoke about the lack of funds,” says Sajitha. “So now we are trying to get corporate sponsors. We have approached many companies, and the response has been encouraging. The sport desperately needs an image makeover." Incidentally, at the nationals, among the women, Sajitha won a gold in free hand-fight (46 kgs), while Rosa won a bronze in the 52 kgs category.

Meanwhile, as the locals ignore Kalaripayattu, people from all over the world are coming to Kerala to learn it. In fact, during their training, sometimes, foreigners came to watch. “They were from Canada, Germany and the Reunion Islands,” says Rosa. “Lucille, from France, told me that ballet and contemporary dance has damaged her knees. But, in Kalaripayattu, we have never suffered any injury, because it is done so scientifically. One reason is that before any exercise we do a lot of stretching movements.”