Going To The Top 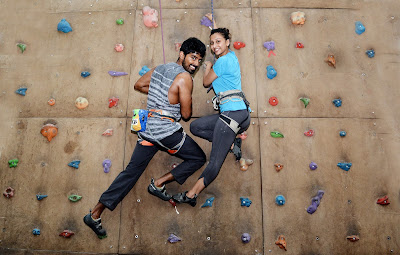 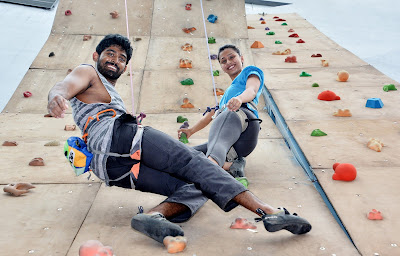 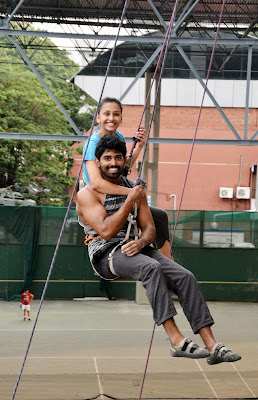 Daniel and Aakriti Wahal run the only artificial rock climbing centre in Kochi, as well as Kerala

At 4 p.m., on June 27, Daniel and Aakriti Wahal started to go up a rock climbing wall at the Regional Sports Centre at Kochi.

Even though Daniel, 24, had done this thousands of times, his heart was beating fast. Soon, they reached the top, at a height of 50 feet. Daniel and Aakriti, 20, smiled at each other. Then they began their descent. But at 40 feet, Daniel gestured to Aakriti to stop.

The Malayali looked into her eyes and said, “Will you marry me?”

Then Daniel reached into his tracksuit pocket and took out a box. He opened it, took out a diamond platinum ring, and slid it into the ring finger of Aakriti.

She smiled radiantly. A four-year courtship was finally heading towards marriage.

Not surprisingly, Daniel first met Aakriti when he went to do climbing one weekend at Bangalore. The Kochi native was doing his B. Com from the Institute of Finance and International Management Business School at Electronics City. He had heard that people were doing climbing inside an empty shipping container.

When he went there he saw people going up and down the inside of the roof. “Like spiders,” says Daniel. “That was the first time I met Aakriti. She was moving so fast.” Soon, they became friends.

Now the married couple run 'The Rock', Kerala's only artificial rock climbing wall. “All types of people come,” says Daniel. “From five-year olds to middle-aged professionals, all the way to a sixty-year-old.”

The rates are affordable: Rs 160 for three climbs inside an hour. Or Rs 250 an hour for as many climbs as possible. Then there is a monthly package of Rs 2000.

There is only technique to follow. “At all times, there should be a three-point contact with the wall,” says Aakriti. “Either it is two feet and one arm. Or two arms and one foot. This ensures that you have strength and endurance.” And there is one rule. “Once you slip off, you have to go all the way down and start again,” says Aakriti.

And contrary to what most people think, it is an intense workout. “After ten climbs you will feel exhausted,” says Daniel.

Despite the exhaustion, many parents can see evident benefits in this sport. “They have told me their children have improved in their studies, because rock-climbing helps develop focus and concentration,” says Daniel. “And you feel a sense of achievement when you reach the top. That confidence rubs off in their performance at school.”

One such child is Rosh George John. On a breezy evening, he stood at the bottom and looked up with an expectant look. After the safety harness is put on, the ten-year-old goes up. He looks confident and climbs steadily. At the 40 ft mark, the wall becomes an incline. But Rosh moves slowly and carefully. Once past that, he heads easily to the top. Later, he says, “I love climbing. I feel great whenever I reach the top.”

Daniel and Aakriti are also feeling great. Because, on October 30, they took the first-ever team, from Kerala, comprising seven boys and two girls, to take part in the South Zone Rock Climbing Championships in Bangalore conducted by the Indian Mountaineering Federation.

And the over-all performance turned out to be good. “Two girls came sixth and seventh in their category, while one boy came sixth out of 40 participants,” says Daniel.

But the surprise package was Daniel's senior in school, Lakshman Dev Das Varma. One day, he called from Dehra Dun where he is studying, and told Daniel he wanted to try rock climbing. “So I told him to come to Kochi,” says Daniel.

When Lakshman came and tried it, he got hooked. And since he wanted proper climbing shoes, made of rubber, he sold his mobile phone and bought a pair at Rs 6000. “So imagine our surprise that at the Bangalore championships, after only ten days of training, he came 18th out of 40 participants,” says Aakriti. “He has a bright future.”

Meanwhile, to ensure a bright future for the couple, they are planning to open more rock-climbing centres in Kochi.