Banishing Away the Bad Omens 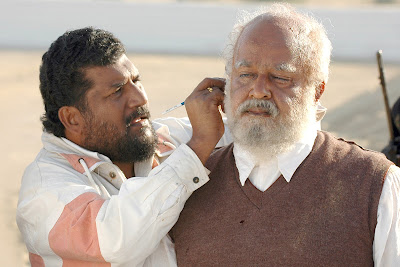 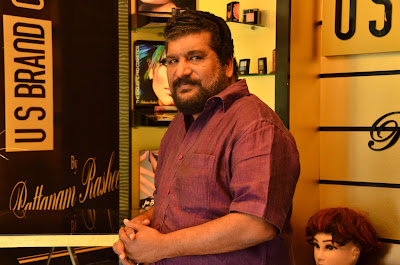 Make-up artist Pattanam Rasheed talks about his experiences in Mollywood

Photos: Pattnam Rasheed applying make-up on Mohanlal for the film, 'Paradesi'; In his studio

At 4 a.m., on a cold winter's day, in 2007, superstar Mohanlal knocked on make-up artist Pattanam Rasheed's door in a hotel at Jodhpur and said, “Are you awake?”

“Yes Sir,” said Rasheed, as he opened the door.

They both had tea. Then the elaborate make-up for Mohanlal began. In PT Kunju Mohammed's film, 'Paradesi', Mohanlal plays Valiyakaththu Moosa, a Muslim who went to Pakistan, before Partition, but returns soon after, but he possesses a Pakistani passport. So he is not accepted as an Indian.

“In the film, Mohanlal's ages from 35 to 80,” says Rasheed. “For this particular shot, Mohanlal was playing an old man.” Rasheed used a prosthetic cap to make Monahlal look bald. Thereafter, he used a white beard as well as an old age stipple lotion, to indicate wrinkled skin.

At the shoot commenced, in the Thar desert, the villagers gathered around. A group of men asked Rasheed, “Who is the star?”

Rasheed pointed at Mohanlal and said, “He is.”

With a mocking look, one of them said, “How can this old man be the star?” Another man said, “You are fooling us.” They abused Rasheed and walked away.

But Rasheed felt happy. “In fact, I felt thrilled that they did not realise that it was all make-up,” he says. “The triumph of a make-up artist happens when viewers look at an actor and cannot figure out whether make-up has been used or not.”

The shoot progressed smoothly. However, the next morning, when Rasheed placed the bald cap, on Mohanlal's head, a large indentation appeared at one side. “Somehow, I could not solve the problem even after one-and-a-half hours,” he says. So Rasheed told the director if he could do a scene with Mohanlal as a middle-aged man. He promised to finish the make-up in half an hour. Kunju Mohammed agreed.

That night, when they were relaxing in the hotel, Rasheed told veteran actor Thangal, who had a small role, about the events regarding the bald cap. Thangal, who has some knowledge of healing, asked Rasheed to get a few eggs.

Then Thangal wrote something in Arabic on the shell of two eggs.

Thereafter, they went into Mohanlal's room. Thangal made the star lie down on the bed. “Then Thangal said some mantras in Arabic while moving the eggs over Mohan Lal's body,” says Rasheed. “Afterward, he threw the eggs out of the window. He did the same for me.”

Following this, there were no problems whatsoever on the film. “Thangal told me that a crew member may have given out negative vibrations,” says Rasheed. “He removed it with his mantras.”

It seemed to have worked. The film won several awards including Best Actor for Mohanlal at the Kerala State Film Awards as well as the National Award for Best Make-up Artist for Rasheed, the first time a make-up person from Mollywood has won it.

(The New Indian Express, Kochi, Thiruvananthapuram and Kozhikode)
at December 24, 2015