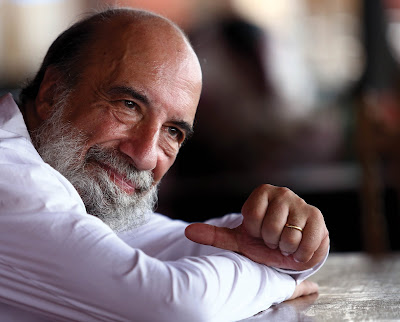 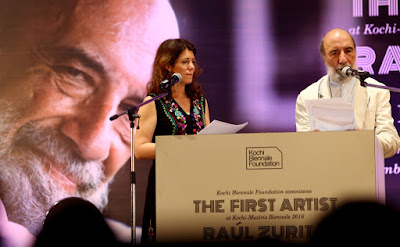 Chilean poet, Raul Zurita, the first artist of the Kochi Biennale 2016, gave a reading of his poems

When Malayalam poet Balachandran Chullikkadu placed a ponnada across the shoulders of the Chilean poet Raul Zurita at the 'Sky Below' event at the Town Hall, Kochi, on Tuesday, the latter had a puzzled look on his face.

gSir, this is our way of showing honour to you,” said Chullikkadu, as Zurita broke out into a warm smile. Later, Chullikkadu said, “A great poet defines his country in its historical context. Poetry is the political resistance of the human soul.”

Zurita, 65, is dressed elegantly: a pastel overcoat and trousers and brown canvas shoes. The first artist to be selected for the Kochi Biennale of 2016 walks with a shuffling gait. But when he begins to recite his poems, in Spanish, his voice gains in power and strength.

Here are a few lines from 'Dream 36/To Kurosawa', read out by his translator Anna Deeny, who works at the Center for Latin Studies in Georgetown University, USA:

'I’m tied up at the back of a military
truck that jolts each time it hits a pothole
in the road. We’re facedown, crisscrossed
one on top of the other like those board
fences stacked up around barracks and I
feel the weight of the ones who ended up
on top of me.
At each pothole our bodies jolt too...

The heel of my shoe is rammed up against
the face of someone who ended up below
me and the weight of the ones on top ends
up ramming it in even further.'

This poem refers to Zurita's life-changing moment: on September 11, 1973, he was arrested by security forces on the day that Auguste Pinochet took power in Chile through a military coup. Subsequently, Pinochet ruled Chile for the next 17 years.

This poem became part of the book, 'Purgatorio', which became a best-seller in Chile.

Later, Zurita, along with writers and artists Fernando Balcells, Diamela Eltit, Lotty Rosenfeld and Juan Castillo, set up the 'Colectivo De Acciones de Arte', a group that did provocative public-art performances against the Pinochet government.

Like the one at New York, in 1982. Five aeroplanes drew letters in the form of white smoke against the blue sky. These were the words from Zurita's poem, 'La Vida Neuva ' (The New Life). Thereafter, ten years later, on the sands of the Atacama Desert, Zurita wrote the words, 'Ni Pena Ni Miedo' (Neither pain nor fear). These four words are more than three kilometres long. This sentence can still be seen from the air because the locals have maintained it against the elements.

Thus far, Zurita has published more than 20 books of poetry. And among the many honours he has won are the Pable Neruda Prize in 1998, the Chilean National Literature Prize in 2000, and the Casa De Las Americas Prize for Poetry in 2006.

At Kochi, as he grips the mike firmly, Zurita says, “Without poetry, humanity disappears.”

(The New Indian Express, Kochi and Thiruvananthapuiram)
at December 18, 2015