A profusion of holy beads 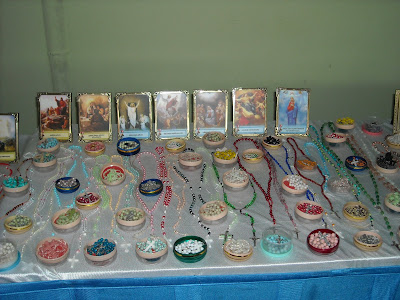 Sabu Caiter has a collection of more than 16,000 rosaries. These include rosaries used by Mother Teresa and blessed by Pope John Paul II

Sabu Caiter was 13 when his grandfather died. As he was about to be buried, Sabu grabbed the rosary that was placed on his grandfather's chest. “I wanted to have something that would remind me of my grandfather,” says Sabu. Little did he realise that it would engender a passion for rosaries. Of course, it helped that both his parents were avid rosary collectors. Soon, Sabu became one.

When relatives and friends who lived abroad asked him what he wanted, he always said, “Please bring me a rosary.” As a result, after 30 years of persistent effort, Sabu, 44, has a collection of more than 16,000 rosaries.

At Sabu’s rosary exhibition at the Our Lady of Ransom church, at Vallarpadam, recently, more than a thousand rosaries are on display. They are made of gold, silver, ruby and emeralds. Some are made of tulsi leaves, coir, and olive wood.

His most astonishing rosary is one in which there are a thousand beads. “A friend made it especially for me,” he says. Sabu is an ardent devotee of Mother Mary and has prayed more than a lakh times using this rosary. “Mother Mary means everything for me,” he says.

This rosary is not on display at the exhibition. Instead, it is kept inside a box. Sabu carefully takes it out and shows it. After a few moments, his eleven-year-old son, Aghil, takes it from him and places it back in the box. Sabu smiles and says, “This rosary is very precious for our family.”

Perhaps, the most unusual rosary is the one made in the USA. It is called, ‘Unborn child’. “Each bead represents Mother Mary’s tears for aborted children,” says Sabu.

There are rosaries named after saints and continental rosaries: with this rosary you can pray for the people in all the five continents. There are wedding rosaries in which two rows of beads run parallel to each other. “This is to suggest that two hearts are beating as one,” says Sabu.

These rosaries have been sourced from many countries worldwide, including Brazil, Germany, Portugal, Spain, Finland, France, and Ecuador. But he says that more than 90 per cent of the rosaries in his collection have been made in Italy. “For centuries, rosaries were made there and it continues to be exported all over the world,” says Sabu.

Some of his rosaries were in the possession of notables. “I have a rosary that has been used by Mother Teresa,” he says. When Pope John Paul II visited Kerala in 1986, Sabu was able to get a rosary blessed by the Pontiff. Later, he got one from Pope Benedict XVI. “I also have rosaries blessed by 130 Bishops,” he says.

At his house in North Paravur, he has set aside one room to store the rosaries. They are kept in small plastic boxes. Some are placed in wooden containers. In the past year, Sabu has conducted more than 10 exhibitions. The parish priest at the St. Don Bosco church at North Paravur, Fr. Francis Kaithathara was the one who encouraged him to display it for the public. “He told me I should share the rosaries with others,” he says.

Sabu says that people feel very happy when they view the rosaries. At the Vallarpadam exhibition, most have a wonder-struck look on their faces. Nayana Roy, a visitor, says, “I am fortunate to see such a wide variety of rosaries. I wish Sabu all the best and he should conduct more exhibitions like this.”

Fr. Dominic Kanappilly, the assistant parish priest of the Vallarpadam church, says, “The response from the people has been overwhelming.”

As his name becomes well-known, people come up to him and donate their rosaries. Sometimes, they send it through the post. “In the last one year, I have received 1500 rosaries,” says Sabu.