The Bishop and the Actress 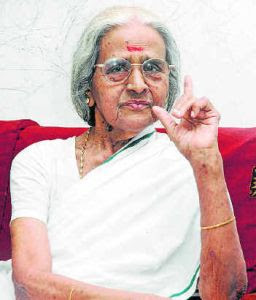 Dr. Philipose Mar Chrysosthum, one of the senior-most bishops of the Mar Thoma church and veteran Malayalam actress Aranmula Ponnamma studied together in the Maramon High School. “We were classmates from kindergarten to Class 3 and became friends,” he says.

Once, a boy cheated in an exam. The principal was about to penalise him when the teacher said, “Please punish me, since I did not spot the cheating.” So, the Principal hit the teacher. All the students cried when they saw this. “I remember the tears streaming down Ponnamma’s face,” says Mar Chrysosthum. “This incident brought the teachers and the students closer.”

Later, Ponnamma got married and Mar Chrysosthum went on for further studies. “We went our different ways,” he says. More than 20 years later, Mar Chrysosthum met up with Ponnamma once again. By then she had made her name as an actress. “She is an excellent performer,” says Mar Chrysosthum. “In fact, she became the character in the roles that she played. I have seen several films of hers, but now, owing to my age -- I am 93 now -- I cannot recall the names.”

Once Mar Chrysosthum told Ponnamma, “Cinema is not true. It is all make-believe. But you have a bigger impact than me. When I tell the truth, people go to sleep. But when you talk, the people remain wide awake.”

The Bishop and the actress met on and off. A couple of years ago they had lunch, along with Chief Minister V.S. Achuthanandan at Ponnamma’s home in Thiruvananthapuram.

“There will never be another actress like Ponnamma,” says Mar Chrysosthum. The actress died on February 21, at the age of 96.