Riding on a Bullet 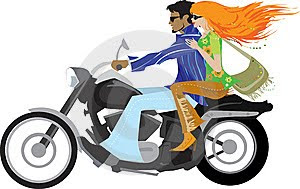 On Convent Road, Kochi, one evening, a couple, on a Bullet Enfield motorbike, stopped under the awning of a deserted building. Then they opened a Lonely Planet guide book, searching for cheap hotels. Martin Coumans is from Belgium, while his companion, Lola Moliere, is from France.

In November, when Martin was in Panaji, Goa, he came across a European who wanted to get rid of his Bullet Enfield. “So I bought it for Rs 35,000,” he says. Since, on a previous trip, he had travelled all over North India, Martin embarked on a tour of South India.

“I went to Hampi, Mysore, Coonoor, and Ooty,” he says. There, he met Lola, who is a stone cutter by profession, and, casually, they became co-passengers. From Ooty the duo went to Coimbatore, on to Munnar and Kochi.

For Martin, 25, like most foreigners, he finds Indian women beautiful. “They have lovely skin and hair,” he says. “Their hair is clean and shiny and they are so well-dressed.”

But he is a bit disappointed that they are shy. “They rarely look at me,” says Martin. In contrast, in Europe, girls look openly and have no hesitation to seek a chat. But Martin shakes his head and says, “I am tired of European women.” Lola, 22, laughs, and says, “Really?”

Martin is a part-time labourer. He has harvested grapes in Côte d'Or in France, as well as helped a friend who was renovating an old farm in Luxembourg. “I have worked for five months, saved money, and now I am on a holiday in India for three months,” he says.

All this is thanks to the steep exchange rate. One Euro is worth Rs 62. “With the same money we can only travel for a week in Europe,” says Lola. “That is why we have come to India.”

Both are intrigued by the country. “I have not experienced such smells in Europe,” says Lola. “In Munnar, there was the beautiful smell of flowers and burnt wood.”

As for Martin, he has an ambivalent feeling. “When I am here, because of the heat, the noise, the pollution and the crowds I go crazy. I think. 'What am I doing here? Everything is so overwhelming'. When I go back to Europe, I think, 'India is so nice. I must go back.'”

It helps that, as foreigners, they are treated differently. Martin recalls a head-on accident he had with another bike rider in Coonoor. “Nobody was injured,” he says. “The guy with whom I had the accident with, immediately took me to a mechanic, who repaired my bike in one day so that I could continue my journey. This can never happen in Europe, where the people are so busy and selfish.”

Meanwhile, for both, the most unusual aspect of their sojourn in Kerala was to see a profusion of red Communist flags. “Communism is dead in Europe,” says Martin. “But it is alive in China,” counters Lola, with a smile.