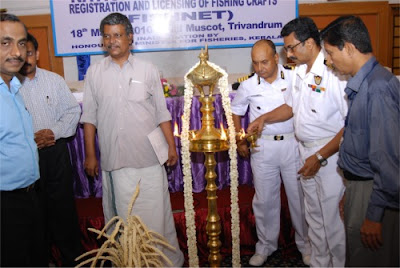 P.I. Sheik Pareeth takes over as the District Collector of Ernakulam, while M. Beena leaves to become the Director of the Fisheries Department

At a brief function at the Collectorate, P.I. Sheik Pareeth takes charge as the 28th District Collector of Ernakulam. The earlier Collector, M. Beena, signs a few forms, which is counter-signed by Pareeth. Then she hands over the official mobile phone, and says, “I wish you all the best. Ernakulam is a very challenging district.”

Later, Beena introduces her aides to Pareeth, and says, “I am sorry to say this, but the entire team has been transferred. You would need to build a new one.” Pareeth nods and gives a smile.

He is a soft-spoken man, but looks eager to take on the responsibility. “Just like the Smart City, I want to make Kochi a smart city,” he says. “I will be concentrating on developing the infrastructure, solving the traffic snarls and water shortage, especially in the Vypeen Islands. There is also a need to develop a satellite city.”

Asked whether he feels nervous, Pareeth shakes his head. “I feel comfortable, because I have more than ten years of experience as an administrator,” he says.

Some of the earlier posts Pareeth held included the directorship of the Fisheries Department, as well as the chief engineer of the Harbour Engineering Department. He helped in the design and construction of the Munambam, Vihinjam, Neendakara, and Thankasseri ports.

Fifteen minutes before Pareeth arrives, Beena enters the Collector's office for the last time. She is wearing a golden-brown saree, and has an easy smile on her face.

“I am happy with all that I have achieved,” she says. Beena had been a Collector for a shade less than three years. Asked whether the tenure was short, she says, “We work at the pleasure of the government. When it is a short tenure, you feel you need more time. When it is a long tenure, you feel it should have been a little short.”

But the best thing about her new job, as Director of the Fisheries Department, is that she will have more time to spend with her children, daughter, Vishnupriya, and son, Kannan. “During my stint as Collector, on some days, I was so busy that I did not have the time to look at my children's study books,” she says. Incidentally, Beena continues to be the managing director of the Vytilla Mobility Hub project.

As she talks, a visitor comes in, and asks whether she could be the chief guest at a function that evening. “After 11 a.m., I am no longer the Collector,” she says. But the woman insists, and Beena says, “It would not be correct when there is a new collector.” After a short discussion, Beena comes up with a solution: Pareeth would preside at the function, while Beena would also be present.

As people in the administration assumed new posts and responsibilities, life on the road outside the Collectorate went on as usual.