I too am a woman 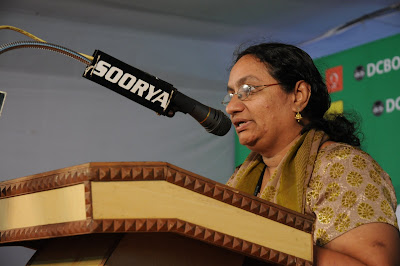 Sr. Jesme’s second book, after the best-selling autobiography, ‘Amen’, has just been released

“The actor Salim Kumar had asked for a copy of my autobiography, ‘Amen’,” says Sr. Jesme during a talk at the DC International Book fair at Kochi a few days ago. “I sent it by courier on November 24. Till December 24, Salim Kumar did not get it nor did I get it back. I kept on inquiring, but got no reply.”

On December 30, when Jesme enquired again, the man at the courier company said, "You can no longer enter this office again." Jesme said, "Then I am not going. I will stay here till I get my book. It is an injustice that an autographed copy goes to somebody else, other than Salim Kumar."

The man pushed Jesme into a corner and began kicking and beating her. The other employees fled when they saw this. Jesme recalls, with a twinkle in her eyes, “People make fun of my excess fat but it was my plumpness which saved me, because I did not get injured. I wondered whether the man’s leg was damaged after all the kicking.”

People gathered outside but nobody intervened. Finally the police arrived. When a policeman asked Jesme to press charges, she declined. He said, "Madam, if you don't file a FIR, how can we stop such incidents from taking place?"

Jesme tells the Kochi audience, “My fear was that if something happened to him at the police station, I would be blamed.” She says that nowadays even educated and well-known women have violent encounters with men. “So, you can imagine what is taking place with ordinary women,” she says. “Most of them are unable to talk about their harassment, and they suffer it in silence.”

Sometime ago, Jesme was travelling on a bus at night. A lady asked a man who was sitting in a woman's seat whether he could get up. The man said, "If I get up, will all these women who are standing get a seat?"

The lady remained silent. "I am going to remain here," he said.

Jesme who was sitting on a nearby seat, said, "What rule is this? If you get up, at least one woman can get a seat." It was only then that the man got up.

Jesme was recounting these incidents during the launch of her book ‘Njanum Oru Stree’ (I too am a woman). It is a compilation of the articles she has written in newspapers and magazines. There are also a few unpublished ones along with an interview and a one-act play based on Jesme’s best-selling autobiography ‘Amen’ by journalist P.C. Harish.

“I have written about my positive and negative experiences inside a convent which had not been written about in ‘Amen’,” she says. These include good moments like celebrating Easter and Onam.

She also has written about the emotion-less life of the nuns. “They are afraid to express their feelings,” she says. Jesme has also analysed the work of writers like M. Mukundan and the late Ponkunnam Varkey. Apart from this, she has delved into her experiences as a student.

Jesme would be hoping that this book will do as well as ‘Amen’, which has gone into 14 reprints so far. With the royalties, she has been able to buy 12 cents of land in Guruvayur and make a house called ‘Amen’. During her speech at Kochi she comes across as sincere and earnest but it takes some time to get used to this former nun wearing a salwar kameez, instead of a habit.

Thanks to her bold speeches and writings, Jesme is becoming a heroine for women in Kerala.

(A shorter version appeared in The New Indian Express, Kochi)