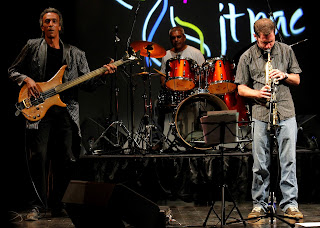 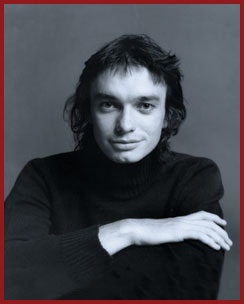 When Mishko M'Ba steps on the stage, the audience is taken aback. He has thick brown braids going all the way down, from his head, almost to the floor. The braids are brown, while the curly hair on his head is grey. The pencil-thin Mishko wears a striped black and white coat, but one side is longer than the other. Underneath is a black T-shirt. Apart from that, he has long narrow trousers, and grey shoes.

The other band members look more regular: saxophonist Matt Littlewood, in jeans and white shirt, but with a tiny tuft under his lips. Drummer Suresh Bascara wears a white T-shirt that looks more like a vest. And Karan Joseph is an ordinary guy excepts when he starts to play the keyboard. Then he grimaces, opens his mouth, nods, shakes his head from side to side, as if he is going through excruciating pain.

The group's performance was a 25th anniversary tribute to Jaco Pastorius, who died, in 1987, at the age of 35. Regarded as a legend for his innovations, Pastorius is one of the most influential electric bass players of all time. In 1988, the late musician was inducted in the Jazz Hall of Fame.

As journalist Bill Milkowski writes in 'Jazz Times': “Today, that unique two-syllable name still registers awe in Japan and France, Germany and Switzerland, Italy and England, Cameroon and Korea, all throughout North America and South America -- and everywhere else that people recognize heart and soul.” As for Mishko he stumbled upon Pastorious’ solo album, ‘Jaco’. “It remained my reference album for several years,” he says. “When its influence was everywhere, I decided not to listen to it any more.”

Mishko began proceedings with 'Come on, Come over'. It takes a while to learn to enjoy the sounds of jazz. But Mishko easily makes an impression, what with his fingers dancing over the strings, a master at work. He frequently closes his eyes, bends his body with the effort, and communicates constantly through his eyes with the other members.

The French-born Mishko studied classical music in Toulouse, before concentrating on jazz and rock. He has played with legends like the late 'soul' singer Ray Charles. Today, he is associated with many jazz groups all over the world, and divides his time between Pondicherry and France.

Soon, the band plays jazz great Miles Davis' 'Donna Lee'. In this song, it was interesting to see Suresh hitting the drums with the flat of his palms, as well as on the cymbals. In the '3 View of Secret', the saxophone takes the lead, with gentle accompaniment by the guitar and drums.

Thereafter, the band moves into 'Opus Pocus'. Says reviewer Jared Pauley in jazz.com: 'Jaco Pastorius composed a hypnotic groove for ‘Opus Pocus’, complete with steel drums. The best part is when Pastorius plays a bass line. This is one of the funkiest songs I have ever heard and I would beg anyone to disagree with me.'

But clearly not everybody in the Kochi audience agrees. Mrs. P takes a blissful nap. She awakens briefly when a song ends and there is applause. Thereafter, the eyelids slide shut and it is off to noddy land, while Mishko and his team strain sinew and muscle to keep the audience awake. But this is being unfair to Mishko. There are fans who shout, 'Wah Wah', and seem to be enjoying the show.

Entrepreneur Ajai Joseph says, “It was amazing. They played some wonderful stuff. I have listened to jazz greats like Charlie Parker on CDs, but this was the first concert that I was attending.”

E. Nandakumar, the former CEO of BPCL-Cochin Refinery, also found the concert interesting. “However, I felt, there was not much of a variety, as compared to Indian classical music,” he says. But Nandakumar liked the latter half of the concert, when the group played songs like 'Continuum', 'Birdland', ' Teen Town,' and 'The Chicken'.

‘The Chicken’, which was the finale, even to one who is not attuned to jazz in any way, can be easily recognized as a superb work, creating all sorts of wonderful emotions in the listener. In the end, Mishko and his band impressed with their remarkable skills and talent.