“He is everything that I wanted in a man” 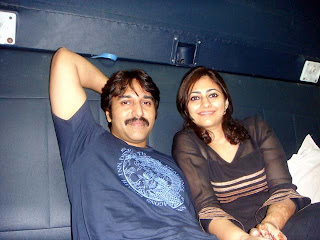 One day, in 1992, the actor Rahman had gone with his friend Essa to have a bite at the New Woodlands hotel in Chennai. Soon, he noticed a family, which included three daughters, walking in. The moment Rahman set his eyes on Meher, he was smitten. He told Essa he wanted to marry the girl. By coincidence, Essa knew the family. A couple of months later, a formal proposal was given.

“There were two hindrances,” says Meher. “We are an upper middle-class family. My father was a pilot with Indian Airlines and, later, Saudi Airlines. We were apprehensive because Rahman was from the film industry. Secondly, my elder sister Saira was not married.”

Nevertheless, Rahman came to meet Meher on November 18, 1992. Meher felt an excitement at seeing the film star at close quarters. “He was everything that I wanted in a man,” she says. But Meher wondered whether her father would agree. But there were no fears on that account, because Rahman made a good impact on his future father-in-law, Abdul Sattar.

“My father was very impressed,” says Meher. “He told me Rahman is a simple and down-to-earth person.” The family accepted the proposal, and the marriage took place on April 2, 1993. [Incidentally, Saira got married to double Oscar Award winner, the music composer, A.R. Rahman, on March 12, 1995].

So what are actor Rahman’s plus points? “He is a loving person and gets attached to people very quickly,” says Meher. “He gets worried about whether I can manage to run the household in his absence. When he is at home, he tries to share the responsibilities. Rahman drops our children to school every morning.” The couple has two daughters, Rushda, 16, and Alisha, 9.

Of course, the big drawback is that Rahman is rarely at home, thanks to long shooting schedules. So when Rushda was celebrating her 16th birthday on January 28, Rahman was unable to be present, even though he was in nearby Kochi, shooting for the film, ‘Bachelor Party’. This was a single schedule of 40 days, in which there was a combination of several actors in most of the scenes. “If Rahman came to Chennai, then one whole day would go to waste for the director, as well as the producer,” says Meher. “So, he had to stay on in Kochi.”

Meher also misses Rahman when there are programmes at school and during parent-teacher meetings. “I have learnt to accept his absence,” she says. “After all, he is the bread-winner of the family.”

It is clear that absence makes the heart fonder. “When he comes home, he is pampered by the three of us,” says Meher. And because Rahman does not enjoy going to a beauty salon, his wife does the facials at home. “I told him, ‘Will anybody believe that in the 21st century, a wife is doing this?’” she says.

One reason is that Meher is still smitten with him, even after 19 years of marriage. “Whenever I see him, I feel a strong sense of love,” she says. And in October, 2011, after many years, the couple went for a holiday to USA, without their daughters, and spent time at Disney World at Florida. “We were like kids,” says Meher, with a smile. “He made me take part in all the rides.”

At lunch time, Rahman encouraged her to eat a turkey’s legs. “It was huge,” she says. “At least five to six times a chicken’s leg. Rahman is a fun person to be with.”

The actor is six feet tall and looks smart and handsome. So, does Meher feel apprehensive that other women will get attracted to him? “I am sure girls like him, but this happens to all stars in the film industry,” she says. “You have to accept that. When I was younger, I would feel insecure. But he would tell me that this is what stardom is all about. Ultimately, whereever you go, in the end you have to come back home.”

Meher has her own theories about the husband-wife relationship. “When a man is given freedom, most of the time he knows how to use it,” she says. “If you are over-possessive and nagging, it has a negative impact. I believe that to have a successful marriage, you need to have trust and give a lot of space to each other.”


(The New Indian Express, Kochi and Thiruvananthapuram)
at June 12, 2012