Chronicling a little-known facet of Kerala 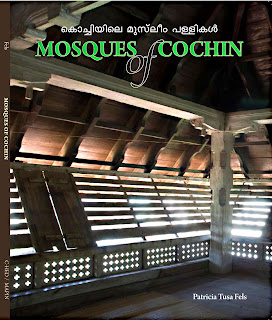 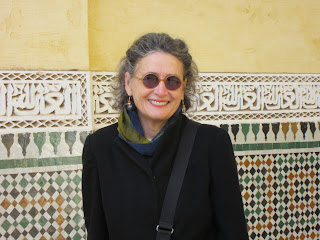 In her book, ‘Mosques of Cochin’, architect and author Patricia Tusa Fels delves into the history and the architecture of the wonderful mosques in the state


Photos: The cover of the book; author Patricia Tusa Fels

In 1510, a Hindu and a Muslim, both merchants, were travelling on a ship. When a large storm occurred, they realised that their lives were in danger. Both the Hindu and the Muslim promised that, if they survived, they would build a temple and a mosque respectively. Eventually, the ship reached Ponnani Beach in Mallapuram district in Kerala. One businessman built the Thrikavil Bagavathy temple, while the other made the Juma Masjid. “If you walk east from the Juma Masjid for eight minutes, you will reach the temple,” says the architect and author Patricia Tusa Fels.

There is another story about the founding of the Kochangadi Juma Masjid (Chembitta Palli) in Mattancherry, near Kochi. A local Jewish merchant was so impressed with the knowledge of Sayyid Fakhr Bukhari, a spiritual leader of the community, that he donated all the timber for the construction of the mosque. Another tale, probably apocryphal, is that the merchant converted to Islam after hearing the Sayyid's talk on the Hebrew prophet Moses.

Whatever it may be, today, the Juma Masjid and the Chembitta Palli are some of the premier old mosques in Kerala. Many of these places of worship have been documented in Patricia's authoritative 'Mosques of Cochin', brought out by Mapin Publishers.

The Seattle-based Patricia had accompanied her husband, Donald, who had come to Kerala on a Fulbright scholarship. As she wandered around, especially in Mattancherry, she noticed these old mosques. A chance meeting with Mohammed Iqbal, a former Cochin Corporation councillor, got Patricia interested in these buildings.

“Iqbal told me about the strong likelihood that many of them would be torn down,” says Patricia. She decided to write a book, but the lack of written material was daunting. But, thankfully, there is a strong oral tradition in Kerala. Many people told Patricia stories on how the mosques were set up. “Each story has some truth in it and had been passed by word of mouth for hundreds of years,” she says.

What has also lasted for a long time is the traditional conservativeness among the Muslims. “Some of the people allowed me inside the mosques only if I came at a time when there were no prayers,” says Patricia. “Others gave permission for me to look in, from the verandah. I don't blame their sense of caution. After all, I am an American woman who suddenly shows up, wanting to know more about the mosques.”

Asked to elaborate on what is common in most of them, Patricia says, “The mosques are built with the local stone. Because of numerous windows, there is an ample air circulation inside. All of them have large timber-framed roofs.” Other elements include wood panels with carved inscriptions, screens, columns and carvings. In every mosque, of course, there is an ablution pool, a mihrab (an arched niche) facing Mecca -- 20 to 23 degrees north of west for Kerala -- and the mimbar (pulpit), where the Imam gives his weekly sermon.

Meanwhile, to facilitate the research, Patricia and the Kochi-based Centre for Heritage, Environment and Development received a Rs. 3.6 lakh grant from the Ford Foundation. Says Director Dr. Rajan Chedembath: “We decided to support Patricia’s project because it is a pioneering work. When we describe the heritage of Kochi, mosques are seldom mentioned.”

Patricia is also worried about the lack of attention paid to these mosques. “Locals say that half of the old mosques in Kochi have already been razed,” she says. In the new mosques which have been built, there is a tendency to mimic the styles of Persia, Arabia, and North India. “Unfortunately, the addition of domes, minarets, columns and flat roofs lacks proportion and integrity,” says Patricia. “There is little relationship to the climate outside. Low-ceilinged spaces turn into broilers when there are power cuts.”

Apart from this, the use of concrete has a jarring effect. The mosque at Cranganore, which is one of the oldest in India, is totally encased in concrete, with a tiny portion of the old tiled roof peeking out. Changes have also been added to the Juma Masjid, Chembitta Palli and the Calvathy mosque. “It is modern kitsch,” says Patricia.

So, this book has come along at the right time. “Patricia’s work will bring welcome attention to the old mosques and the need for preserving them,” says Dr. Rajan. “Undoubtedly, it is the prerogative of the believers to do so. I am sure they will step forward.”

Says Patricia, “Through the book, I wanted to show how beautiful the mosques are, and the need to celebrate their history. Hopefully, in future, the old mosques will not be demolished.”