Going here, there, and everywhere 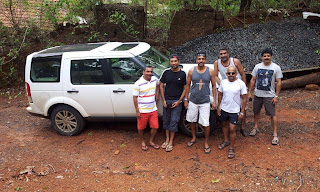 When the Kochi-based Franco Jose and his friends reached Kemmangundi in Karnataka, it was pitch-dark. “There was a power cut,” says Franco. Since they had no hotel booking, they searched everywhere till they landed up at a lodge, belonging to the Karnataka government’s department of horticulture.

“We saw a dormitory, with the help of a candle,” says Franco's friend, Binu Marangoly. “It was a dingy place. Some of us had apprehensions. But what made us stay was the wonderful weather.” It was cold and pleasant, because Kemmangundi was 5,000 ft above sea level. But there was one sight which created further unease.

Just outside the door there were more than 30 dogs milling about. “They were waiting for some food,” says Franco. “We were frightened to see them.” Nevertheless, because of the late hour, they stayed on.

After they ate food, they threw the leftovers to the dogs. “Unfortunately, the whole night, these dogs were fighting with each other and we could not sleep,” says Binu.

The next morning, the group was taken aback by the sheer beauty of the hills all around them. “In fact, it is more beautiful than Munnar and there were few people and buildings around,” says Franco.

Thereafter, they followed a mountain trail for a while. It was much later that when they checked on Google Maps, they were able to locate the same trail. “It seemed Google has mapped out the entire world,” says Franco.

And as for the dogs, when the group went to the canteen to have breakfast, the animals followed them silently.

Franco, Binu, and their friends – M. Benny Thankachan, Jayan Charles, Paul Sajan and Thomas Joseph – belong to the Y's Men Young Cochin Club. All of them are successful businessmen and professionals, in their forties. They wanted to do something different.

“Somehow, we did not want to go to the routine places, like Chennai or Ooty,” says Binu. “We wanted to travel in an unplanned manner. Instead of going directly to one destination and staying three or four days, we wanted to explore places we had not seen before.”

It helped that they were travelling in the ‘Discovery' Land Rover. “It has such wonderful suspensions that even when we went over rough terrain, the glass of water that I placed on the dashboard did not overturn,” says Binu.

From Kochi , they went to to Peravur, near Thalaserry. There, they explored the Aralam Wildlife Sanctuary. There was a watchtower, which they went up and were able to get a 360 degree view. “It was a wonderful sight,” says Franco. “The trees were about 40 feet high.” At a nearby stream, the group indulged in swimming.

From there, they went to the Manipal, where three of them – Jayan, Thomas, and Benny – wanted to see their former alma mater: The Manipur Institute of Technology. At 7 p.m., they set out from Manipal and landed at Murdeshwar. At a resort, an elderly man, on seeing the group, quipped, “Guys, are you running away from your wives?”

The next morning, the group was amazed to see that they were near the Arabian Sea. “The beach was unspoilt,” says Binu. “We helped the fisherman to pull the nets.”

When they left, they stopped at a Shiva temple. “The Shiva statue, 123 feet high, was jutting out into the sea,” says Franco. The statue was built by several sculptors, and financed by a Karnataka businessman and philanthropist R.N. Shetty, at a cost of Rs 50 crore. The idol is designed such that it receives the sunlight directly and thus appears sparkling all the time.

As they travelled on Highway No 17, randomly, they would take detours and explore the countryside. Says Franco: “The beauty was breath-taking with rains giving a mystique look and feel throughout our journey.” Adds Binu: “We just wanted to follow whereever our whim took us. Thanks to the Land Rover, we could drive over any sort of terrain.”

At night, they landed in Goa and spent two days on Baga Beach . They loafed around, even though it was raining heavily and ended up having meals in shacks. One shack had the unusual name of St. Anthony’s bar. “We were wondering what would have happened if a name like that was put up on a bar in Kerala,” says a smiling Binu.

On the journey from Goa to Bengaluru, they visited the Jog Waterfalls. But since Thomas knew of a small waterfall deep inside a forest nearby, they went in search of that and found it and had a gala time. Thereafter, they took more detours, before reaching Kochi after travelling a distance of 2540 kms.

“We could do this, because we did not take our families along,” says Franco. “There is an element of risk. But to pacify our wives, we told them we would be taking them along on our next trip, which is to explore the north-eastern states.”