An Indian version of the Bible 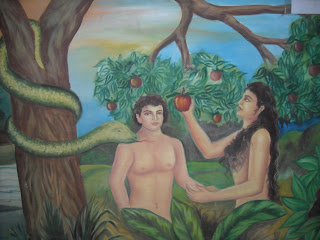 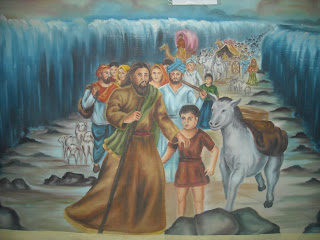 Photos: Adam and Eve; the crossing of the Red Sea


One day in 2005, Edwin Parmar got an idea. He wanted to do a large painting on Biblical themes. At that time, he was living in Kalol, 40 kms from Ahmedabad. So he bought a thick roll of canvas. “I would open a certain section, do a painting, roll it up, and open the next section,” he says.

In the end the painting was 470 feet long and three feet wide. Edwin worked for 16 hours daily and was able to complete the work in 40 days. This work is now on display at the Pastoral Orientation Centre at Palarivattom, Kochi, at an exhibition organised by the Bible Commission of the Kerala Catholic Bishops' Council.

It is an oil on canvas, and the 101 paintings, each seamlessly moving into the next, immediately grabs the eye, for its simplicity and clean lines. And what immediately becomes clear is that the paintings are different from the usual works on Biblical themes.

So Adam sports black hair, while Eve has waist-length black curls. During the crossing of the Red Sea by the Israelites, the prophet Moses has a black beard. Some of the men wear turbans, while the women have veils. There are a couple of bullocks pulling a cart. When Moses holds up the tablet containing the Ten Commandments, it is written in Hindi.

In another painting the three wise men – who had come to see Jesus at a stable in Bethlehem, just after He was born – look like Indian kings wearing crowns. When the 12-year-old Jesus goes to the temple, in Jerusalem, the scholars whom he meets are wearing round beads, around their neck, just like Hindu priests.

“I wanted to Indianise the paintings,” says Edwin. And he has a particular reason for this. In his village, Kalol, as well as in Mandvi in the Rann of Kutch , where he lived for a few years, the local people are not easily accepting of Christians. “We are not allowed to have our own churches,” says Edwin. “So I wanted to do a painting which shows that our religion is just as Indian as any other faith.”

Meanwhile, in Kochi, all sorts of people have come to see the exhibition: from schoolchildren to elderly people. In the comments book, visitor Lobo Lawrence says, “This is a great inspiration. It takes us through the birth, death, and resurrection of Jesus.” Adds Jayson Jacob:  “It should be exhibited in all the churches.”

So far, the painting has been shown in 39 churches in Thrissur. Fr. Paul Kattukaran, the coordinator of the Artists’ Forum of the Office for Social Communications for the Catholic Bishops' Conference of India, has been helping Edwin in staging the exhibitions.

“The response has been very good,” says Fr. Paul. “But there have been a few people who are upset that the traditional blonde look of Jesus Christ and the people have been changed. Some said, ‘Jews in Israel don’t look like this.’”

But Fr. Paul takes heart that most people like the Indianised version. Incidentally, when the painting is folded up, it weighs 250 kgs.

As for Edwin, following the success of the exhibition in the past two years in Kerala, he has decided to settle down in the state. “For an artist, Kerala is an ideal place. There is peace and greenery and the people are nice,” says Edwin, who is married to Maneesha, a fashion designer. The couple have a three-year-old daughter.