‘The greatest fear is the fear of death’ 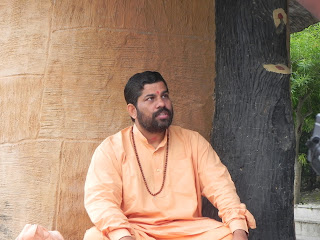 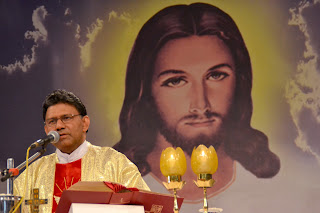 Religious and secular motivational speakers talk about their experiences

In a television studio, at Thiruvananthapuram, Swami Sandeepananda Giri, preacher of the Bhagwad Gita, sits cross-legged in front of two mikes. Behind him is an image of Lord Krishna riding a chariot.

He says, “There has never been a time when you and I have not existed, nor will there be a time when we will cease to exist. The human being inhabits the body through the stages of childhood, youth, and old age, but at the time of death, he will go into another body.” The bearded Sandeepananda is wearing a saffron shirt and speaks in a simple language using expressive hand gestures.

Ever since he debuted on the Doordarshan channel on April 14, 2006, Sandeepananda has been a popular speaker on the Bhagwad Gita. So far, more than 2000 programmes have been aired. He has also travelled to Europe, USA, Australia, Canada, and has been a speaker at the Convocation of Hindu Spiritual Leaders at the 2009 Parliament of World Religions in Melbourne. “The doubts and problems that Arjuna faced in his life is present in every person's life in the 21st century,” he says.

Sandeepananda has interacted with all types of people. So what is it that troubles the average person? “The strongest fear is the fear of death,” he says. “But there are many other anxieties. When elections take place, there is an apprehension of losing among the political parties. When a woman is pregnant, she is worried. A girl sits for her examination, and she is scared. When a youngster is about to get married, he is terrified. All this happens because of the intense attachment to life and things.”

‘Man has a spirit, which connects him to God’

Fr. Augustine Valooran is the director of the hugely popular Divine Retreat Centre, at Muringoor, about 42 kms from Kochi. A veteran speaker of over 25 years, he says, “My main message is that man should lead an honourable life on earth. He should be transcendent. Man is a body, but at the same time there is a spirit in him, which connects him to God.”

Apart from Muringoor, he has preached all over the world. “The biggest problem in people is selfishness,” he says. “And this brings about excessive consumerism, immorality, and greed.”

Asked about the qualities of being a good public speaker, Fr. Valooran says, “You should have a message.
And that is to challenge individuals to lead a greater life than what he or she is leading now. Secondly, do not look down on anyone. Whoever came to Jesus Christ, He never condemned them. Finally, you must make the audience feel important. And the truth is that each and every person is important in this world.”

Since Kunju Mohammed Pulavath, a lecturer in Kochi, is fluent in Arabic, he is invited to give talks on the Quran. “The Quran provides solutions for all of life’s problems,” he says. “I talk about the relevance of the Holy Book.”

Pulavath says that people suffer from all kinds of problems: financial, social, mental, and spiritual. “The only way out is to have a deep belief in God,” says Pulavath. “The first and last resort is always Prophet Mohammad. If you want peace of mind and a good life, always follow the tenets as propagated in the Quran.”

To be an effective speaker, it is important to know the profile of an audience. “If the audience is a highly-educated one, you can give an intellectual speech with a lot of scholarship in it,” he says. “When the audience comprises ordinary people, I use simple language. I don’t shout or yell. I tell a lot of stories. I always keep my speeches short and to the point.”


‘Every thought has an electrical impulse’

After securing his MBA, Sajeev Nair began his career in corporate planning and marketing and spent several years working for blue-chip companies. But in 1998, he moved to the direct-selling industry. “All types of people join this industry,” he says. “They need to be brought up to a certain level. Training has to be given on how to be a good entrepreneur, how to dress and talk and develop the right attitude. I wanted to transform people’s lives.” For several years, he worked with Amway and now he is involved with Mona Vie, the fastest growing direct-selling company in the world.

Sajeev’s theory on transformation is simple. “The way a person thinks determines many outcomes in his life,” he says. “Every thought has an electrical impulse. The neurons are communicating through a neurotransmitter. When you have the same thought over and over again, the same bunch of neurons is firing. Soon, a strong neural pathway is formed. So, it is difficult to change your habits and attitudes, which are usually negative.”

He bemoans the fact that in Kerala, there is an atmosphere of negativity. “It has been built up over a period of time,” says Sajeev. “That perspective has to change. People should have an attitude of appreciation and encouragement.”

'Delete negative files in the mind’

Dr. P.P. Vijayan is standing among a group of eager listeners at a conference hall at a five-star hotel in Kochi. “People behave badly because of the memory of negative events lodged in the subconscious mind,” he tells the audience. “It is necessary to delete these files. Patanjali says the mind is like a fog. That is because of emotions like anger and resentment.”

The group is a mix of entrepreneurs, professionals, housewives and students. Vijayan, wearing a black suit and trousers, has been a motivational speaker for 25 years.

Vijayan continues in the same mode. “You have to understand the language of the subconscious mind — the images and the emotions behind it. First, something is created in the mind, then in reality. For example: the Burj Al Khalifa, the tallest building in the world, was first conceived in a person's mind. If the image created is perfect, then the resources will come, along with the right financier and architect.”

Vijayan speaks in a measured tone and yet there is something compelling about his speech. “You have to understand your audience, only then can you be effective,” he says. “If we are able to give solutions to their pain, they will be happy.”

However, to enjoy this happiness the price is a bit stiff: the cost for each participant for a one-day programme is Rs 4900.