Capturing Life in an Abstract Way 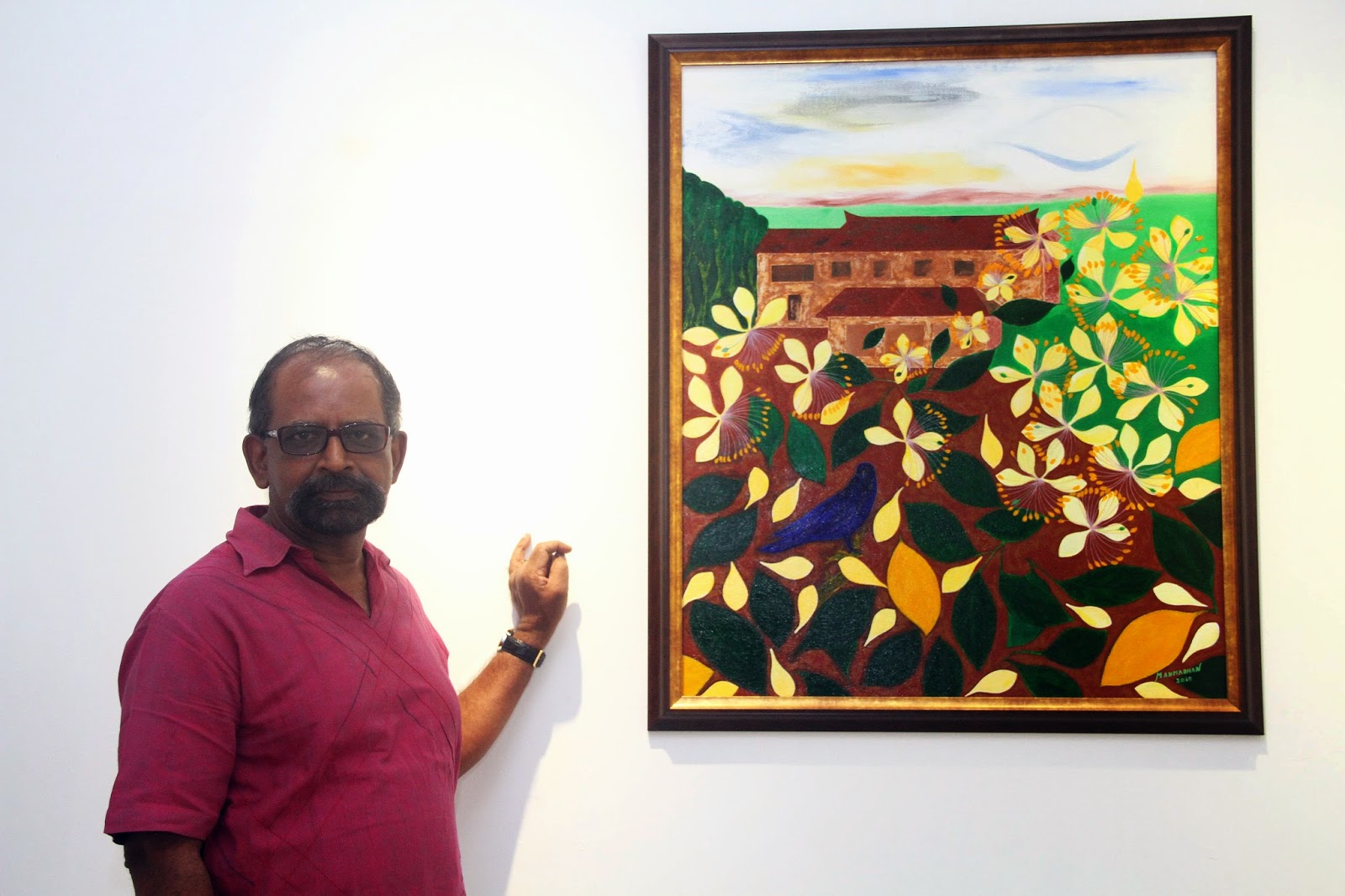 CR Manmadhan’s exhibition, a mix of acrylic and digital paintings, touches on a wide variety of subjects

In CR Manmadhan's painting, 'Nostalgia', you can see a closed eye at the top right-hand corner, against a white sky. A tear rolls down. On the ground, there are houses, with sloping roofs, and across one side of the painting are beautiful flowers. A crow stands on a red patch in front.

“This scene is based on the famous memoir by Kamala Das called ‘Neermathalam Poothakalaam’,” says Manmadhan. “The Neermathalam [or the four petal flower] is rare. I was not even sure how it looked like, and had to do research on the Internet.”

When the artist Kaladharan asked Manmadhan to make a contribution to an exhibition on Kamala Das, sometime ago, he came up with this idea. Now this acrylic on canvas is on display at Manmadhan’s solo exhibition, ‘Perception’, being held at Kochi.

Across 20 acrylic and digital paintings, Manmadhan deals with a variety of subjects. They include depression, the resurrection of Jesus Christ, the antics of Lord Krishna, the aftermath of the tsunami, the different stages of life, the rape of the 22-year-old photo journalist at the Shakti Mills at Mumbai, as well as the 2014 football World Cup.

In the World Cup painting, set in green, players are physically attacking each other. One player's foot is nearly touching the head of the opponent. In the background you can see a menacing bear and snarling dogs. At the bottom, there is a hand of the referee, trying desperately to control the action. “When I was watching the World Cup, I felt there was too much of physical aggression and very little of football,” says Manmadhan. “It was like animals fighting.”

His most charming work is the Life series of four paintings, set next to each other. In the first, called Life 1, painted in pink, violet and mauve, there is a suggestion of innocence and tenderness. In the second, which indicates youth, it is more lively, with mauve and yellow and has a nude woman’s body in the background. In the third, middle age is depicted in red, orange and green. Finally, old age is represented by grey and black colours.
“The passage of life is in my thoughts,” says Manmadhan, a former News Editor of Mathrubhumi newspaper.

In another work, there are faces of two men and a woman set against a brownish-red background. But the woman’s eyes are striking because it is looking towards one side and away from the viewer. “The eyes are shifty, because there is no longer any honesty in relationships,” says Manmadhan. “I wanted to show the present-day complications between man and woman.”

A work called ‘Hope’ depicts a post-tsunami scene. When you look closely, you cannot notice anything. But when you step back, one can see the collapsed buildings, and although the sky is a mix of black and grey, there is a thin layer of light which is spreading in a horizontal manner. The sky is slowly getting clearer. “There is hope in the painting,” says Manmadhan.

All the paintings have been done in the abstract style. And it is a method that Manmadhan has deliberately chosen. “The power of realism is going down, because of the advancements in photography,” says Manmadhan. “No matter how realistic your painting is, a photograph will look better. That is why I have concentrated on abstract art. What is important is not what we see, but what we perceive.”

This is Manmadhan’s fourth solo show. Ever since his retirement in 2006, his painting career has been going full steam. In November, 2012, one of his paintings was selected for the prestigious Reader’s Digest.

Asked whether he loves journalism or painting more, Manmadhan says, “Art! Because I experience inner freedom. I can do what I want. I was interested in painting from my childhood. But I could not make it a full-time profession, because it would have been difficult to make ends meet. Very few artists can survive on painting only.”

Manmadhan has an interesting take on great works on art. “There is not much of a difference between great painters and ordinary ones,” he says. “One is well known, so his works sell. A lot of it has to do with marketing and hype.”