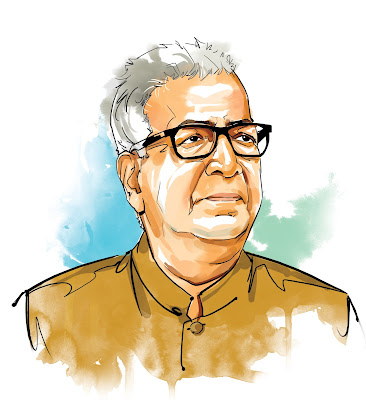 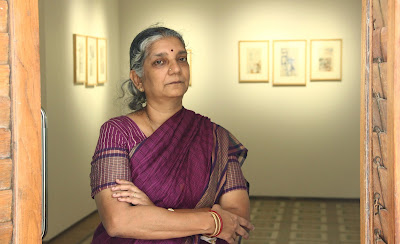 Uma Padmanabhan, the only child of the late artist KG Subramanyan, talks about her father. A month-long exhibition of his works is taking place at Kochi

When the father and daughter stepped out, after watching the circus, along with a Dutch piano teacher, it was snowing heavily. So they walked silently, the 10-year-old holding her father’s hand. After a while, even though the street was deserted, they managed to get a cab. They dropped the piano teacher at her residence before they headed home, to Lincoln Towers, in New York. “This is a fond memory of my early childhood,” says Uma Padmanabhan, the only child of the famed artist K G Subramanyan (1924-2016), who won the Padma Vibhushan in 2012.

Thanks to a Rockefeller Foundation grant, Subramanyan was spending the year, 1966-67, in America. So, Uma studied at a school in New York. And it was there that Uma realised that her father was an artist. “Appa was doing drawings on egg cartons,” says Uma. “He also did acrylic paintings, tapestry work and fibre weaving. I was seeing this for the first time.”

The Baroda-based Uma had come to Kochi to attend the inauguration of her father’s one-month long exhibition (till May 19) called ‘Sketches, Scribbles, Drawings’ at the Durbar Hall. There is a poignant look on her face as she gazes at her father’s work. “I enjoyed the animals that he drew,” says Uma. “He has also done portraits of me, but that is now with an art collector.”

When her mother Susheela Jasra, an artist as well as a Gandhian social worker, passed away on February 28, 2005, it became Uma's responsibility to look after her father. So, she would spend two weeks with her husband in Mumbai and the rest of the month in Baroda. “Whenever I would come back, I would be amazed at the number of sketches and canvases Appa had done,” says Uma.

One reason for Subramanyan's prolific and varied output – paintings, sculptures, drawings, graphics and illustrations – was because he led a disciplined life. Every day, after breakfast, he would enter his studio at 9.30 a.m. For the next several hours, he would work, before breaking off for lunch. Following a nap, he would return to the studio by 3.30 p.m. He stopped work at 5 p.m.

“At night, he would do something or the other,” says Uma. “It could be either scribbling, or writing poems.”

Father and daughter would have long conversations. And he passed on to Uma his philosophy of life. “Appa told me to avoid gossiping or criticising people,” says Uma. “He should I should be friendly with everybody and help them.”

Subramanyan, himself, had a helping attitude. When young artistes would come to the house, he would be friendly, co-operative and encouraging. And when they held their exhibitions, he would always attend them.

So, it is no surprise that the passing away of this artistic icon has left a vacuum in Uma's life. All the people who would come to meet Subramanyan, at their bungalow at Sama have stopped coming. They ring Uma up and promise to come, but none of them do. “The world is selfish,” says Uma. “It is more so in the art fraternity. People became friendly with my dad because they felt they could gain something. Most of them were not sincere.”

Meanwhile, recently, Uma went through a poignant moment. While cleaning a cupboard, she came across a brand-new saree that her father had bought her and which she had not used. “Tears started rolling down my face, as I remembered Appa,” she says.

(The New Indian Express, Kochi and Thiruvananthapuram)
at April 25, 2017