The Dark Side Of Childhood 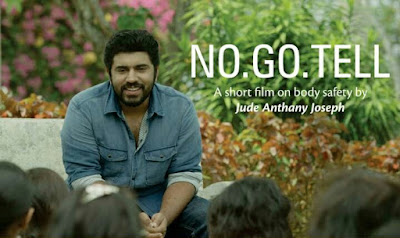 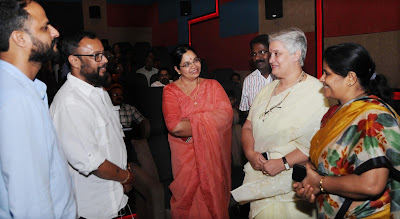 Director Jude Anthany Joseph has made a short film, which stars Mollywood star Nivin Pauly, and highlights the safety measures that children need to take

A few months ago, Shobha Koshy, the Chairperson of the Kerala State Commission for Protection of Child Rights was sitting in her office at Thiruvananthapuram. Suddenly, she looked out of the window and saw somebody who looked like Mollywood film director Jude Anthany Joseph. But she was not sure.

However, a couple of minutes later, her assistant came and told her, “The director of ‘Ohm Shanti Oshaana’ wants to see you.”

And when Jude told Shobha he wanted to make a film about child sex abuse, she felt very happy.

Shobha was talking at the launch of the seven-minute film, ‘No. Go. Tell’. The film starts with a group of girls playing in a park. Some are on the swings, while a few are on the sea-saw. Through the entrance, Nivin Pauly enters. The girls recognise him and they get all excited. He greets them as he settles down on a bench. Soon, the group sits on the grass in front of him.

“There are certain parts of the body which no stranger should touch,” says Nivin. “These are the lips, chest, buttocks and between the legs.”

And he tells the children that they should learn to identify two types of touches: good and bad touches. When parents touch the child it is a good touch, but not a stranger. And when somebody does try, there are three safety measures.

“One is so say No loudly, the second is to Go away from the person and the third is to Tell a trusted person like a parent, grandparent, or a teacher,” says Nivin. “If a stranger wants to give you sweets or ice-cream, or tries to show you some videos, you must walk away.” The film ends with a song by the children. And the all-India Childline helpline number 1098 is flashed on the screen.

Earlier, Shobha had said that when you open the newspaper you are confronted all the time with reports of child sex abuse. “People ask me, 'Is this really true? Are there so many cases happening?',” says Shobha. “Unfortunately, I cannot compare with earlier times, because we don't have any statistics. But the difference today is that more people are speaking about the issue.”

To get an idea of the scale of the problem, the Commission has been collecting data for the past two years. “And the findings are disturbing.,” says Shobha. “The largest number of abuse does not happen with strangers. It happens within the family and the neighbourhood. It happens not just for girls, but boys, too.”

The best way, of course, is by creating awareness. “Children are the most vulnerable and yet they need to be sensitised,” says Shobha. “We, at the Commission, were quite excited when Jude came forward. They are people who can create a ripple in society.”

Director Lal Jose, who was present at the viewing, says, “Only by seeing the film did I understand the seriousness of the issue. But it is also very important that children receive the right kind of message. If there comes a point when a father cannot hug his child, because everybody is under a cloud of suspicion, it will be very sad. And I say this as a father of two daughters. But having said this, this is a really well-made film and we need more films like this to spread the message in our society.” Dubbing artiste Bhagyalakshmi also spoke.

'No. Go. Tell’ has been brought out by the NGO Bodhini, with a sponsorship from the Muthoot Pappachen Foundation.

(The New Indian Express, Kochi and Thiruvananthapuram)
at April 22, 2017