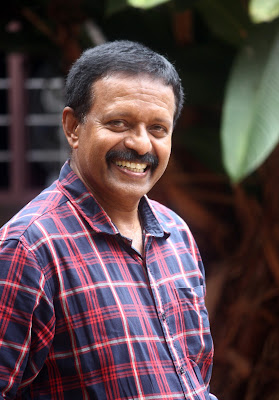 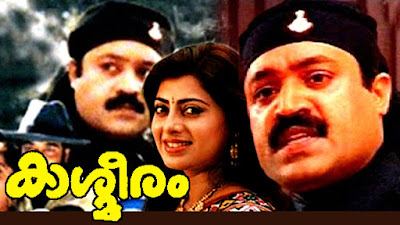 COLUMN: LOCATION DIARY
Cinematographer Saloo George talks about his experiences in the films, 'Kashmeeram', 'Thaniyavarthanam' and 'The Guard'

Photos: Saloo George taken by Melton Anthony; the poster of 'Kashmeeram'
By Shevlin Sebastian
For the film 'Kashmeeram', there is a fight between Black Cat commando Suresh Gopy and his team against a group of criminals at the back of a house.
The shoot was in Delhi. But try as they might, the crew could not get a house for shooting. Because it was during the days following the assassination of Rajiv Gandhi at Sriperumbudur on May 21, 1991. “There was enormous tension in Delhi,” says cinematographer Saloo George. “So, finally producer Suresh Kumar got in touch with his friend S Krishna Kumar, the Union Minister.” The latter agreed to the shoot although he said he would not be there, but his wife Usha would be present.
“The shoot was at night,” says Saloo. “Soon, there were gun fights and bombs going off. After a while, without us realising it, the whole area was surrounded by police, who had automatic machine guns. They thought that the minister's bungalow was under attack.” Finally, Usha had to come out and tell the cops that a film shooting was taking place.
Suddenly, one of the assistants, Rony Shashi (name changed) decided to place the dummy guns in a car parked outside. As he was doing so, he was spotted by another group of policemen. “Rony was seconds away from being shot,” says Saloo. “Quickly, the production controller, who speaks Hindi, managed to explain the situation and resolve the issue peacefully.”
Another issue which was settled peacefully took place in the movie, 'Thaniyavarthanam' (1987), which stars Mammooty. The shoot took place in the 40-room bungalow which belonged to the family of Sreedevi, the mother of the late actress Monisha Unni. The actor's uncle, Unni stayed with his wife and two children in just four rooms. At the back of the bungalow, the canteen was put up. “One day, the cook came running,” says Saloo. “He said he cannot cook in the area because it was full of snakes. Unni immediately said there was nothing to worry.”
He went to the back, spotted the snake and said, “Gopalakrishnan, go away. Don't frighten these people. Let them work in peace.”

Amazingly, the snake looked up and left quietly. Unni had names for every snake in the vicinity. Another day, when another snake came, Unni said, “Ramakrishnan, stop being a nuisance. Go away.” And once again, the snake left.
“Unni said that snakes will never attack you unless you try to kill it,” says Saloo.
That may be true, but not all are comfortable in the presence of snakes or animals. The shoot of 'The Guard' (2001) took place at the Parambikulam Wildlife Sanctuary in Tamil Nadu. Kalabhavan Mani was the star in the film. After the day's shoot was over, he was offered a room in a tree house. “It was at a height of 30 feet,” says Saloo. “You climb a ladder, and, later, it is removed. Otherwise, certain animals could climb up.”
However, when Mani went to sleep, at about midnight, the flush started working on its own. Mani got up and checked the bathroom. There was nobody around. But he could see the water moving in the cistern. Mani tried to sleep, but the flush started working again. Soon, he could hear other sounds: the growl of tigers, the howl of jackals and the roar of elephants. Not surprisingly, Mani could not go to sleep. “Later, Mani began to sleep with us in the dormitory,” says Saloo. “The local guards later told us that sometimes monkeys entered the bathroom in the tree house and operated the flush themselves.”

(The New Indian Express, Kochi, Thiruvananthapuram and Kozhikode)
at April 26, 2017