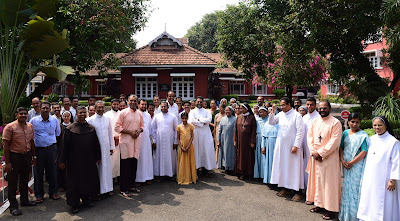 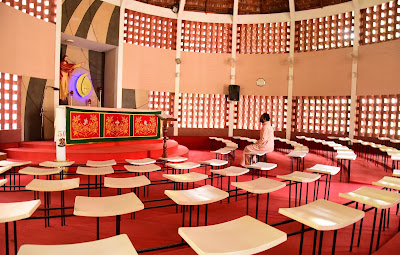 The Pastoral Orientation Centre, at Kochi, has celebrated its golden jubilee recently. A look at its activities

Photos: Staff and visitors at the Pastoral Orientation Centre, Kochi; the inside of the chapel. Photos by Albin Mathew

On a recent morning, at his office at the Pastoral Orientation Centre (POC) at Palarivattom, Kochi, director Fr. Varghese Vallikkatt received a visitor.

His name was George James (name changed). In his early thirties, George was out on bail, after spending five years on a murder charge.

“George told me that he had been falsely accused,” says Fr. Varghese. “Now the woman who said she was a witness to the murder has recanted her statement during the ongoing trial. There is a good chance that he will be set free.”

George said that he had become more spiritual in prison. After speaking for a little while George left. “Many people who come to the POC feel a sense of peace,” says Fr. Varghese.

The POC has been in the news because it celebrated its golden jubilee recently. The centre houses the representatives of the three main churches of the Catholic community, namely the Syro-Malankara, the Syro-Malabar and Latin rites. In Kerala, the Catholics comprise about 55 lakh people. “The POC has an important mission of bringing all the churches together,” says Mar Cardinal George Alencherry. Incidentally, it is also the secretariat of the Kerala Catholic Bishops' Council.

The idea to set up the Centre came following the second Vatican Council (1962-65), which propagated the idea of the universal church being a community of individual local churches. And the Palarivattom POC got a big push by the late Cardinal Joseph Parecatill who was an ardent supporter of the Indianisation of the church.

At the centre, there are 21 Commissions, comprising priests and lay people, which look after subjects like justice, peace, development, education, family, bible, and the media. Apart from that, regular seminars and conferences take place.

“We discuss matters connected with our faith and the relationship with the larger society,” says Fr. Varghese. “What should be our contribution? And what should be our mission at this particular time?”

Sometimes, there are soul-searching discussions. “There have been recurring criticism about our work in education and health care, and of our institutions becoming commercialised and competing with others,” says Fr. Varghese. “We had a lot of discussions about our role. And we came to to the conclusion that all educational and health-care institutions should be part of our mission, where we should serve the poorest of the poor.”

Following the arrest of Fr Robin Vaddakumchiryil, the vicar of the St Sebastian church at Kottiyoor, on sexual abuse charges, there were deliberations on how to ensure a safe environment for minors and vulnerable adults.

The POC is a good place to have talks thanks to its campus spread over four-and-a-half acres. There is a main administrative block, a chapel, a residential building for visiting Bishops and priests, a canteen, and a block for the womenfolk.

Interestingly, at the back, the priests are growing tomatoes, small gourds, cabbage, cauliflower and bananas. A gaggle of geese, turkeys and ducks can be seen, apart from hens, an emu and a Doberman. At one side, the POC and the Vediyoor Madom Temple share a wall, while on another, it is with the Madavana Panchamoorthi Temple.

Asked whether the increasing siege on minorities is a source of worry, Fr. Varghese says, “It is a challenging and difficult time, especially in North India. We are a peace-loving people, who have contributed much more to society than the size of our population. But we value as much the union and the solidarity with other communities.”