When Your Brain Cells Die One By One 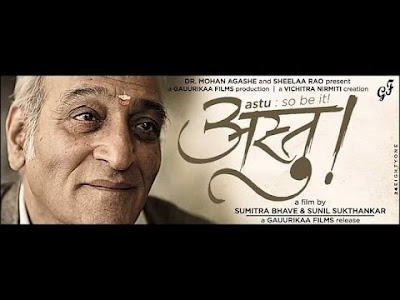 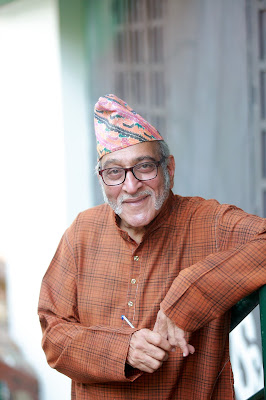 Photos: The poster of the film; Mohan Agashe

The shoot of 'Astu' (Marathi for 'so be it'), a film on Alzheimer's Disease was taking place at the main market in Pune. Veteran Bollywood actor Mohan Agashe, moved around, like an Alzheimer's patient, looking lost and lonely. “Since I am well known, the people stepped forward to help me, thinking that I am in some sort of a problem. I had to tell them, 'Please don't help me'.”

The 123-minute film was shown at the JT Pac, Kochi recently. Mohan plays Dr Chakrapani Shastri, a 90-year-old Sanskrit scholar and former director of the Oriental Research Institute, Pune, who is gradually losing his mind. One day, his daughter Ira (Irawati Harshe) steps out of the car at a market and asks Shastri to wait in the back seat. As he sits alone Shastri sees an elephant on the road and becomes fascinated. He steps out and follows the animal, even though the mahout owner Anta (Nachiket Purnapatre) tries to discourage him.

Eventually, the mahout takes Shastri to his tent on the edge of Pune besides a river. There, Shastri's uneducated wife Channama (Amruta Subhash) treats him with great respect and understands instinctively that Shastri now had the mindset of a child.

Meanwhile, back at Ira's home, there is hysteria. Ira and her husband Madhav, (played by Milind Soman) inform the police. There are flashbacks of how Shastri is gradually losing his mind to dementia. Ira visits his old haunts, but Shastri is nowhere to be found.

Ira's sister Rahi (Devika Daftardar) arrives from Mumbai. Soon, there is a clash between the two sisters about how Rahi does not have the time or the inclination to look after their father. Ira also meets up with a former colleague of Shastri to see whether he had gone to her house. In the ensuing conversation, the woman clarifies that she did not have an affair with Shastri, which his late wife and family had suspected. Eventually, after a day, Shastri is located by the police and there is widespread relief all around.

It is a deeply moving film and impressed the audience no end. Says Paul Davis, the Kochi-based care manager and helpline co-ordinator of the Alzheimer's And Related Disorders Society Of India (ARDSI): “Mohan Sir has portrayed an Alzheimer's patient in the most accurate manner possible. I am sure he has studied deeply on the subject. Our caregivers who watched the film told me that every mannerism of his reminded them of some of their patients. I am not surprised the film won so many awards.”

'Astu' had won the Audience Award for Best Film at the Indian Film Festival at Stuttgart, the Best Regional Film at the Delhi International Film Festival as well as two National Awards for Best Dialogue (Sumitra Bhave) and Best Supporting Actress (Amrutha), apart from being nominated for awards at numerous festivals.

Asked the reasons why Mohan says, “Instead of making Alzhemeir's as something sensational, it has been portrayed in a sensitive manner. We have provided as accurate a portrayal as possible. Most people know about the medical aspect but we showed the anxieties and suffering that a family goes through. The idea is to sensitise people about the issue. However, now that our life expectancy is going up, we will see many more cases than what we used to see before.”

In Kerala, after the age of 60, the number of dementia victims ranges between three to four percent of the population says Dr S. Shaji, President of the Kochi chapter of ARDSI, who had come to view the film.

Asked how dementia occurs, Shaji says, “It is a degeneration of the brain cells. As a result, it affects mental functions like intelligence, memory, and orientation. The person will no longer be able to live an independent life. Anybody can be affected. However, scientific evidence suggests it has genetic origins.”

So, do you want to live longer, asks Mohan, even though medical science is actively marketing artificial longevity? “When you do a bypass surgery the quantity of life will increase, but does the quality?” says Mohan. “You may be buying Alzheimer's Disease because of your greed to live longer.”