Save Kochi, Take the Bus 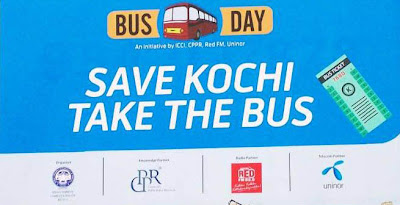 A Bus Day programme by Transport Minister V.S. Sivakumar and others highlight the need to travel in public transport to ease traffic congestion and pollution in Kochi

“I hope you had bought tickets,” says P. Rangadasa Prabhu, the president of the Ernakulam District Residents Association Apex Council, to a group of women councillors of the Cochin Corporation, as they step down from a private bus at Thoppumpady.

“Of course, we have,” says Councillor Soumini Jain, while her colleagues, Essy Joseph and Retnamma Raju, nod their heads. On the sidewalk, magician K.N. Kutty puts on a red bow-tie, a black waist-coast over a striped red and black shirt, and a top hat on his head. “I plan to show some tricks on the bus,” he says.

They had all gathered to take part in the 'Bus Day' programme, organised jointly by the Indian Chamber of Commerce and Industry, the Center for Public Policy Research, FM Red, and Uninor.

A few minutes later, at 8.15 a.m., State Transport Minister V.S. Sivakumar gets into a low-floor air-conditioned bus. Behind him, there is a huge crush of people, including policemen, legislators, councillors, mediamen and workers of political parties. A wag says, “This is the first time that a low-floor a/c bus is so crowded.”

As Sivakumar steps forward to speak, magician Kutty proffers a gas lighter. The minister proceeds to light the wick of a candle, which is turned, by magic, into a colourful hand fan by Kutty. So the magician finally gets his few seconds in the limelight.

Sivakumar smiles and says, “Every day, in a rapidly growing city like Kochi, more than 200 vehicles are being registered. This will lead to an enormous increase in traffic jams, apart from pollution levels. That is why we want to encourage bus travel.”

He acknowledges that bus journeys have to be made smooth and comfortable, in order to attract those who travel by cars. “Eight new Thiru Kochi buses will be introduced soon,” says the minister, to widespread applause.

MLA Dominic Presentation bemoans the fact that despite crores of rupees being spent, the Fort Kochi bus stand is not operational. “We need to make this work,” he says. Mayor Tony Chhamany promised that the stand would start functioning soon.

The others who spoke include former Transport Minister Jose Thettayil, who had come up with the 'bus day' concept during his tenure. And he practises what he preaches.

On the 'Safar' private bus from Fort Kochi to Aluva, following the function, Thettayil is a passenger, en route to his home in Angamaly.