Wonders of the winged kind 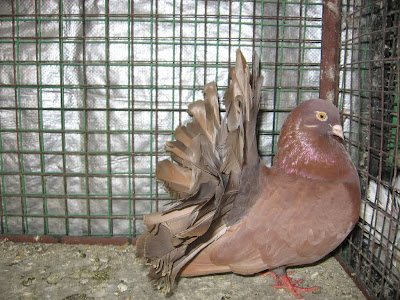 For many people rearing pigeons is a passion and a joy

Dr. Benjamin D'souza remembers clearly the first pigeon that he bought as a child. Near his grandmother's house in Kochi, there was man, named Joseph, who would sell pigeons at Rs 5 a pair. “I saved my pocket money over several months, and bought two,” he says. He took them home, but within a day, he got a shock. The pigeons had gone missing. D'souza wept, but there was nothing to be done about it.

It was only much later that D'souza realised that the pigeons had flown back to Joseph. “He would sell it to the next person,” he says. “It took quite a while for the customers to realise what was happening. Thereafter, nobody bought pigeons from Joseph.”

Pigeons have a homing instinct, which explains their uncanny sense of direction. Pigeon breeder Liju Pallan had a similar experience. He bought two homing pigeons from a friend in Coimbatore, and placed them in a cage in Kochi. After several months, he let out the pigeons.

“Two days later, I noticed that the pigeons were missing,” he says. “I called my friend in Coimbatore and told him the birds were no longer with me. He said, 'Don't worry, they are with me.'” The pigeons had flown 250 kms to go back to the original owner.

D'souza laughs when he hears Liju's story. “Pigeons can fly at 80 kms per hour and can travel a distance of 800 kms,” he says. In his sprawling house in Kochi he has 27 cages where he grows all types of birds, like the fowl and the cockatiel, apart from pigeons.

“I have 120 pigeons,” he says. They include fantails, Lahore, mookee, hippie and nuns. The birds make cooing sounds when he opens the cage. “It is difficult for me to go on a vacation,” he says. “I have to feed my birds.”

He gives them wheat, seeds, green peas, and the bone of the cuttle fish. “But the most important thing is to ensure that the drinking water is fresh every day,” he says. “The water can get dirty when droppings fall in it.” Interestingly, he says, pigeons can survive without food for a couple of days, but if they don't have access to water for a day, they will die.

For outsiders, the big problem is the numerous droppings that litter the floor. But in D'souza's case, he has come up with an apt solution. “I have sprinkled sawdust, gravel, and fine wood shavings on the floor and the droppings mix with that,” he says. “It becomes a good manure for the plants in my garden. And if the cage is kept clean, there is no smell.”

His pigeons are also disease-free. D'souza has a simple method for that. “When I buy a new pigeon, I never put it with the others,” he says. “Many breeders make this mistake. The pigeon which comes in may have the Newcastle or the Paramyxo virus, which can wipe out an entire flock.”

Incidentally, for the past five years, D'souza has been the president of the 120-member strong Kerala Pigeon Society.

Meanwhile, a breeder, who prefers to be anonymous, says that for many of them it is just a business. “I know of a lot of people, some of whom are financially-strapped, who have spent Rs 50,000 to buy high pedigree pigeons,” he says. “But, somehow, the birds don't hatch eggs or they die suddenly. It becomes a big financial loss for them, and some of them have lost their mental stability.”

Liju, on the other hand, is a stable person. He stays in a house with a large compound in Kochi. On the terrace, he has numerous cages where he has more than 125 pigeons, which include fantails, Jacobean, Bokaro, Sirhas and Pouters.

Asked about the charm of growing pigeons, he says, “I feel a mental relaxation when I am with the pigeons. Unlike human beings, they don't snap back at me. They are kind and friendly. I love them.”