A Tibetan in Kochi 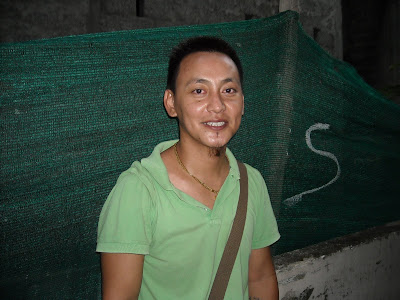 Thupten Yamphel talks about how he yearns to go to Tibet, a country he has never seen, and his experiences in Kerala

At 6.30 a.m., Thupten Yamphel opens his shop on Mullassery Canal Road in Kochi. His five employees have already arrived. They take out the merchandise from the boxes -- the imported leather shoes, sandals, and sneakers -- cleans them with feather dusters, and places them neatly on racks. The prices range from Rs 200 to Rs 1200. By 7 a.m., the first customer drifts in.

The unusual thing about Thupten, 31, dressed casually in a T-shirt and jeans, is that he is a Tibetan exile. Twenty-five years ago, his grandfather came to Kochi from the Tibetan enclave of Bylakuppe in Mysore and started the shop. Later, his father took over.

Meanwhile, Thupten studied till Class 5 in a Tibetan school in Bylakuppe and moved to the Breeks Memorial Anglo-Indian school in Ooty. During the summer vacations, he would come home to Kochi.

It was during these holidays that his grandfather, Tsering Thargyal, would talk about Tibet. “He said that it was so peaceful in Tibet,” says Thupten. “Nobody worried about tomorrow. They lived for today. They were very happy. He spoke about the beauty of Tibet: the mountains, the blue skies, and the cool weather. Sadly, I have only seen Tibet in videos.”

Thargyal found life in Kochi quite different. “My grandfather said that in Kochi everybody wants to make money,” says Thupten. “It is so competitive. Once that aim is fixed in the mind, many people do things which are not right.”

Unusually, his parents did not talk much about Tibet, but there was a reason for this. They left Lhasa for India when they were only three years old. “They have no memory of the place,” says Thupten. Here’s a brief recap of Tibet’s history: China annexed the country in 1951 and 2 lakh Tibetans have gone into exile ever since.

After he completed his Class 12, Thupten came to Kochi and did his B.Com from Sacred Heart College in Thevara. Thereafter, after a year's course in interior design, he went to Bangalore and joined a call centre.

It was there that he met Rievine, a Christian girl from the town of Senapati in Nagaland. After a courtship of two years, they got married on December 25, 2007, settled in Kochi, and now have a three-year-old son, Tenzin.

“I came back to Kochi because my father was unwell and I decided to look after the shop,” says Thupten. Subsequently, his father moved to Bylakuppe.

In Kochi, the people have been friendly and kind. “They respect ladies and children,” he says. “If I am traveling on a bus with my family, a man might get up and give his seat to my wife. In Mysore, they will make us stand and the conductor will double-check to see whether I have taken a full ticket for my son, even though he is an infant.”

However, there is one drawback about living in Kochi. “The weather is too humid,” he says. “So, I welcome the monsoon rains even though my business goes down.” The best time for the trade is during the festivals of Onam, Ramzan, and Christmas.

At his home, Thupten retains some links with Tibet. There are several photos of the Dalai Lama. “He is our God,” he says. “I pray to him every morning.” Sometimes, on weekends, Rievine cooks Tibetan dishes. So they have momos (dumplings), Thupka, a noodle soup, which is served with meat, and Tingmo, a steamed bread.

When son Tenzin grows older, Thupten plans to take him to Bylakuppe, so that he can be taught the Tibetan language, culture, and religious traditions. “It is very important that he knows who we are,” says Thupten.

And, despite his comfort in living in Kochi, the moment Tibet becomes free he will go back. “After all, everybody likes to stay in their own country,” says Thupten, with a smile.