All of four and no less 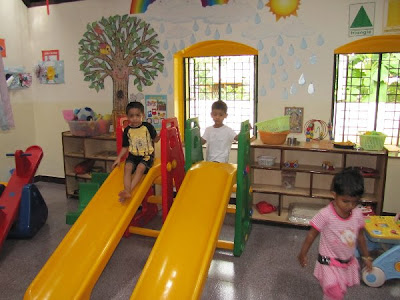 There is a debate among parents, teachers, and psychologists about whether the minimum age for admission in kindergarten should be four years of age

During the admission process this year for the kindergarten section of a private school, principal Jeena Mohan (name changed) had a tough time. Ever since the State Government announced that a student has to complete six years of age on June 1 for admission to Class 1, the management had taken the decision that the minimum age for admission to Lower Kindergarten would be four.

“Many parents, who had children of three and three and a half years, were upset,” says Jeena. “They were keen to get the child off their hands. They feel that the responsibility of educating the child rests on the teachers.”

However Jeena agrees with this cut-off date. “There is a big difference between three and four years,” she says. “A child, at three, is unable to hold a pencil properly. There is a lack of clarity in speech. And there is also the problem of toilet training.”

Another person who agrees with Jeena is Annie Cherical, teacher in charge of the kindergarten at Vidyodaya school, Thevakkal. “It is good to have a cut-off date at four years,” she says. “Children are more ready when they are older. I know that parents say that children are smart at 3 ½ and earlier. But they are seeing that one child in front of them.”

On the other hand, the Vidyodaya teachers have noticed that when there are children between 3 ½ and 4 ½ in a class, usually those who are four plus perform much better. “This is very clear to us,” says Annie. “But, at the same time, I am not saying that there is something wrong with the 3 ½ year old child.”

Jeena bemoans the fact that even though going to kindergarten is not a must, it has gained a momentum of its own. “But we try to avoid teaching too much,” she says. “Definitely, writing is taught only in upper kindergarten.” She says that many schools have set up a heavy study schedule for the toddlers. “There are schools, where what is taught in Class 2 is being taught in kindergarten,” says Jeena. “Children will develop an aversion to studies.”

Annie says that formal learning like writing and reading should be avoided because it is far too early for children to assimilate these concepts.

The new thinking is that children should be allowed to play and enjoy their childhood, till they are four. “The later they come to school the more capable they are of understanding what is being taught,” says Jeena.

Some parents, of course, do not agree. Jiny Soney, a mother of two young girls, says, “My daughter, Veronica, joined kindergarten when she was three and a half. And she had no problems whatsoever.” Her younger child, Victoria, at 2 ½, is already in a playschool and has learnt songs, numbers and alphabets with ease. “Children are much smarter these days,” she says.

Dr. Siju Thottappilly, who deals with the behavioural problems of children, insists that the earlier a child goes to school, the better. “I don't think there is any problem of children going to a creche or play school,” he says. “It is better than being looked after a maid-servant, especially if the mother is working. Maid-servants will not give as much care. In school, children are able to develop their social skills.”

But there are drawbacks also. “Sometimes children feel pressured when they have to do compulsory studies in play school and nursery,” says Siju. “So, a younger child will find it difficult to cope. But in good schools children learn only through games and play and this should be encouraged.”

Overall, it is a matter of debate whether this cut-off date is necessary. “There have not been any scientific studies that have been referred to, regarding this,” says Annie.