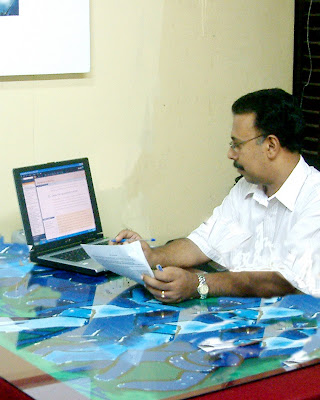 In a radio documentary, 'When Time Stands Still', award-winning radio journalist Biju Mathew shows that watching the signs emitted by Nature can enable people to predict a disaster much in advance of scientific methods

Joseph Kurien, 70, is a farmer in the Idukki district of Kerala. For decades, he depended on the signs given by nature to predict the weather. Some of his tips are simple. “When dragonflies hover at three feet above the ground in a circular manner, it means that the monsoon season is about to start,” says Kurien. “When the same fly moves around in a group, about fifteen feet high, it means that the rainy season is over.”

Kurien was featured in the All India Radio documentary, 'When Time Stands Still', made by the Thiruvananthapuram-based Programme Executive Biju Mathew. This has been selected for a global broadcast by the United Nations Economic and Social Commission for Asia and the Pacific (UNESCAP) through a competition conducted by the Kuala-Lumpur-based Asia Pacific Broadcasting Union.

There are other signs which the farmers can observe. “If you notice round-shaped spider webs, just above the grass, while walking in a forest, it means that the rainy season is over,” says Mathew. “Because spiders will only make webs when they are sure the monsoon is over.”

But it is perhaps in detecting natural disasters that the farmers have the best knowledge. “Some trees start leaning, which, to an observant person, means that there is a possibility of a natural disaster taking place,” says Mathew. “Just before an earthquake, animals which live in holes, like rabbits, squirrels, and snakes will come out and move frantically from place to place. Dogs will also bark loudly and run about. If there is going to be a rainfall which will destroy crops, hawks will cry out in a loud voice.”

In Mathew's documentary, he also focuses on Babu Kalayil, who professes that he has Extra Sensory Perception. “Babu predicted the Asian tsunami in December, 2004, three months before it happened,” says Mathew. “He was aware of the recent Japanese tsunami and earthquake one month before the event.” Unfortunately, when he went to media houses to inform them about this, nobody paid any attention. Babu also predicted the earthquake, which measured 3.6 on the Richter scale, which took place recently in the Kottayam and Idukki districts of Kerala.

“When I am about to see a vision, my brain and body gets extremely hot,” says Babu. “Thereafter I can see a series of images. They are as clear in my mind like scenes from a movie. That was how I saw the tsunami. And with the help of intuition, I can find out when and where the event is going to take place. My skill would be vital to take adequate precautions when a natural disaster does take place.”

UNESCAP has been looking for traditional ways to detect natural disasters. Says Salvano Bricero, the director of the United Nations International Strategy for Disaster Reduction (UNISDR): “No matter how good the technology or how accurate the forecast and warnings, if the information does not reach people in danger in a timely and understandable manner, the warning system will fail.”

Early warning systems are a must in the Asia-Pacific region, where, according to the UNISDR, more than 50 percent of the world’s disasters take place. These include typhoons, tsunamis, floods, droughts, fires and other natural hazards.

“An early-warning system will give governments enough time to protect critical infrastructure, like power plants and dams, which can create further damage if they are not secured,” says Mathew, who has won European Union and Asia Pacific Broadcasting Union awards for his documentaries.

All these precautions are necessary for India also because it is a disaster-prone country. According to UNISDR, about 60% of the landmass is susceptible to earthquakes, while 8% of the total area is vulnerable to cyclones. Over 40 million hectares is subject to floods.