Bible scenes in a Kathakali play 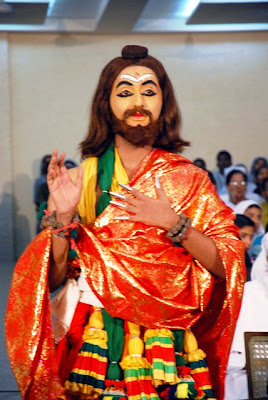 Vignettes from the life of Jesus Christ were enacted in a Kathakali drama. It received an enthusiastic response

One day, a year ago, in a burst of inspiration, Fr. Joy Chencheril wrote a long poem on the Christian Mass. While he was pondering over it, an idea struck him. 'Why not make this poem into a Kathakali drama?' he thought. “We Christians should promote Kathakali, which is a dying art,” says Fr. Joy, who belongs to the Missionary Congregation of the Blessed Sacrament. “Very few people care for it. Only foreigners come to see it. Not many temples organise Kathakali performances during their annual feasts.”

When he was a child growing up in Mannar, in Kottayam district, Fr. Joy had attended many Kathakali performances at nearby temples and had grown to love it. Hence, he decided he would do something about it.

He approached Radha Madhavan, who is a well-known attakatha writer. An atthakatha is a story running alongside aKathakali drama. “I was very enthusiastic,” says Radha. “I have a lot of respect for other religions.”

One of the reasons for the lack of popularity of Kathakali is because the shlokas are in Sanskrit. But Radha and Fr. Joy worked closely, over six months, to render the shlokas in Malayalam.

“The aim was that even if you do not understand the hand and leg movements and the facial expressions, you can still follow the drama,” says Fr. Joy. Incidentally, this is the eighth attakatha written by Radha.

The drama, called 'Divyakarunya Charitham', was staged recently at a packed hall in the Basilica of Our Lady of Dolours in Thrissur.

“The play begins with Pontius Pilate, the Roman Prefect of Judaea, asking his wife why she is gloomy,” says Radha. “She replies that she saw a dream in which God tells her that a man who has not done any sin should not be punished. Pilate replies, brusquely, 'Do not interfere in political matters.'”

There is also a scene between Pilate and Judas Iscariot, a disciple of Jesus Christ, who agrees to betray him, by kissing him on the cheek, in exchange of 30 pieces of silver. This meeting does not take place in the Bible. “I used creative license,” says Fr. Joy.

After the Last Supper, in Jerusalem, where he washes the feet of his disciples, Jesus sets out with them to the Garden of Gethsemane. At the garden, Judas betrays Jesus by kissing him. Soldiers then take Jesus to Pilate, who gives the order for Him to be crucified. Jesus then carries the cross on the road to Cavalry, where he is crucified, and resurrected three days later.

The audience has a rapt look on their faces as they watch Christian words and themes being enacted by artistes of an ancient Hindu dance form. In fact, apart from the role of Jesus Christ, which is played by Ebin Jose, all the other parts are played by Hindus. A few of the performers belong to the one of the well-known Kathakali schools in the state: the Kerala Kalamandalam. The choreography was done by Kalamandalam Sajan, who acts as Pilate's wife.

“We used the same costumes and instruments as in any other Kathakali play,” says Sajan. “It was only for the character of Jesus Christ that we had to add a wig and a beard. I did feel a bit apprehensive, because we needed to stick to the historical Jesus, as well as keep it in the Kathakali tradition.”

In the end, it is a superb programme, interrupted now and then by sustained applause. Dr. James Manimala, a Malayalam professor, who watched the play, says, “For centuries Christians had regarded the Kathakali as a Hindu art form, dedicated to the epics like the Ramayana, the Mahabarata and the Puranas. So, it is astonishing and wonderful that a Bible theme has been portrayed. I am sure there will be many more Kathakali plays, based on the Bible, after this.”

Says Kathakali fan N.G. R. Nair: “It is a welcome step in the Indianisation of Christianity. The cultural assimilation of different religions is the key to national integration.”