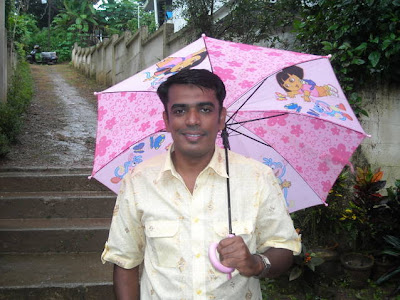 Abdul Khadar Kakkanad has made his name doing numerous parody songs, highlighting the ills of society. Many of these can be seen on You Tube. He also composes songs for politicians during the Assembly elections

In the ‘Kochi Tuskers Kerala, Mosquitoes’ video on You Tube, which is doing the rounds among Malayalis, actor Kochin Mimi is walking down a street in Kochi. Very soon, he is beset by mosquitoes. He slaps them away in a frenzy but it is a losing battle. Meanwhile, Mansoor Yuva sings about the sorry state of the city. A part of the lyrics, written by Abdul Khadar Kakkanad and Shiju Anjumana, goes like this:

This is, of course, a parody song from the album ‘Gana Nivedanam’. In fact, the music is lifted straight from the Berny-Ignatius hit, ‘Vellaram Kilikal’ from the 1994 film, ‘Mangaylasoothram’. “Somehow, the music matched the lyrics perfectly, so we chose this song,” says Khadar.

Regarding the mosquito song, Khadar says, “Shiju and I wrote about our sufferings because of mosquitoes, the pot-holed roads, and the randomly-thrown garbage. It was to remind the powers-that-be about the sorry state of Kochi. I want to create works that will contribute to the betterment of society.”

Khadar remembers a parody song he made on the vulnerability of young girls when they start using mobile phones. Based on a superhit Mapilla song, ‘Manasinte Maniyarayil’, the girl falls in love with a man she does not meet, refuses an arranged marriage, and when she finally sees him, he turns out to be an ugly ruffian, with frazzled hair and a rough voice, although in his conversations he had assured her he looks like Shah Rukh Khan.

Shocked, the girl becomes unbalanced and ends up in a mental asylum. He has also done songs on the futility of hartals, the exploits of Sachin Tendulkar, and mocked controversial songs like ‘Silsila Hai Silsila’.

Khadar has been producing parody albums for the past several years. He began with audio cassettes in 1990s, about 70 of them, and when the trend shifted to videos, he began composing albums on VCDs.

Interestingly, although his videos can be seen on You Tube, the buyers of the albums are from the lower middle and middle-class. “They have no access to the Internet,” he says. The listeners are between 15 and 35 years of age. He has put up these videos on You Tube in the hope that out of 100 listeners, at least 10 will be interested enough to buy the albums.

“You Tube is a wonderful medium,” he says. “It enables us to reach a very wide audience and that too free of cost.”

During the 2010 football World Cup, Khadar put up the ‘Laka Laka’ song, with vocals by Liji Francis, accompanied by the same music and visuals used by Shakira in her international hit, ‘Waka Waka’. “We wanted to make fun of the state of Kerala football,” he says. “In fact, during a review of Indian football NDTV showed clips of our video.”

When asked about copyright issues, since he is lifting tunes made by others, Khadar says, “So far, I have not been charged with any copyright violations. In fact, when people listen to my songs, they develop an interest in listening to the original. Actually, it increases the sales of the original.”

He remembers meeting composer Jassie Gift who complimented Khadar on the parody of the latter’s superhit song, ‘Lajjavathiye'. “It was called ‘Padmavathiye’ in my version,” says Khadar, with a smile.

Composer Berny has no problems of his music being lifted. “Mimicry songs have been part and parcel of Kerala culture for long,” he says. “So composers are used to the copying of tunes. But what upsets me deeply is the rampant piracy of films and CDs. It has become difficult for us to earn a living by composing music.”

Meanwhile, the resourceful Khadar has found other means of earning a living. He composes humourous songs for politicians during election time.

In the Kerala Assembly elections, held in April, he made about 200 five-minute songs for various politicians including Benny Behanan, K. Babu and Hibi Eden, all winning MLAs from Ernakulam district.

These are played through loudspeakers in election vehicles, as it moves through the localities. Sometimes, they stop at junctions. “I sing short verses, so that people can understand, as the car moves along,” he says.

Dynamic, energetic, and optimistic, Khadar is a star in his own right.