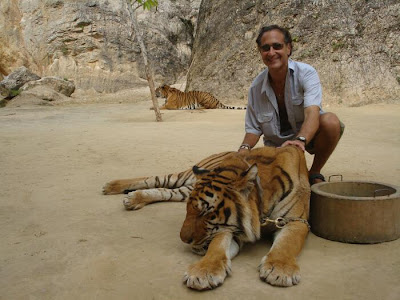 American David Shore has travelled all over the world in the past 25 years. But now he is enamoured of Kerala and India

Photo: David Shore at the Tiger Temple in Thailand

When American traveller David Shore was at the Tiger Temple in Kanchanaburi, Thailand, he was given an offer. He could enter the open-air cage of tigers and caress the animals.

“For that, I had to sign a waiver certificate which stated that the temple authorities were not responsible for my death,” he says. Before entering, David had to take other precautions. He could not wear bright colours like oranges, reds, yellows, or greens. “These excite the tigers," he says. "You must not make any sudden movements or show that you are fearful. Animals, like tigers and dogs, can sense if you are afraid of them. If anything went wrong, the tigers might scratch the visitor with their paws. You could get blinded or killed.”

Eventually, the interaction went off fine. There is a picture of David sitting on his haunches gently touching the furry back of a tiger, which is lying down. In other photos, he is muzzling the neck and smiling broadly for the camera. Apparently, you can also bottle-feed a cub and bathe a tiger.

Thanks to poachers, many tigers had been killed in that area. So the cubs were adopted by the Buddhist monks at the temple. Now, it has become a popular tourist destination.

David has been travelling around the world for more than 25 years now. But from 2005 onwards, David has become enamoured of Asia, especially China and India. “What I like best about Asia and India is the remarkable diversity, in terms of the culture, food, people, weather, colours and languages,” he says, at a home-stay in Fort Kochi. He takes out a Rs 10 currency note from his wallet, flips it over, and shows the 15 languages that are printed there. “This explains to you the diversity,” he says. “There are 22 official languages in India. Which other country has so many? Not one.”

This is his third trip to India and to Kerala also. “On most evenings, I go to the Fort Kochi beach, and buy fresh seafood like butter fish, red or white snappers, tuna and prawns,” he says. “I pay local prices, and get it cooked with lemon, garlic, and salt.”

For David, a lawyer, there are two types of Indians. “There are the educated Indians who speak and write in English and work with foreigners,” he says. “On the other hand, the local people don't speak English. When I go into a restaurant, I just look at what people are eating, and then point at it, and have the same.”

The locals, he says, are the real Indians. “I like to deal with the ordinary people,” he says “I go to the local markets, and do all my purchases. All over the world, if you want to have an authentic feel of that country, it is best to interact with the man on the street.”

Meanwhile, thanks to his companion, Chinese travel writer, Cloud, David has learnt a new way to travel. “Earlier, I would cram as much as possible, while visiting a country,” he says. “But you end up becoming too busy. You see a lot, but you do not remember everything. The best way is to not do too much. Spend more time in less places. One week in each city. You need time to absorb everything. It is just like having a meal. You would like to savour the flavours, which takes time.”

Not everybody will agree to this slow-motion way of travelling, because of the large amount of time that is needed. For most people, three weeks is the most they can get away from work. And some also don't enjoy travelling too much.

David gives an example. In August, 2008, he landed in Beijing and realised that the Olympic Games was taking place. So, he decided to see the various events. He called up his Filipino girlfriend in San Francisco, and asked her to come. “She said, 'Why should I fly 10,000 kms, when I can watch it on television?'” David now says, “To see Olympics live is so different. There is a three-dimensional effect. On TV you only see what the camera shows you. I never knew that at the gymnastics centre, several competitions takes place at the same time. I see the real world when I travel. All my senses come alive.”