A door to one's memories 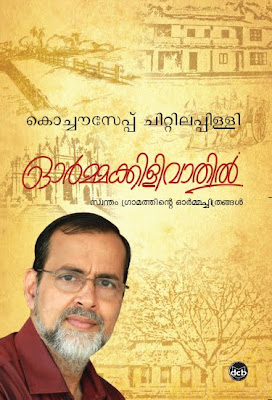 Photo: The cover of the book

On a recent Saturday morning, industrialist Kochuouseph Chittillapally is preparing for a fortnight-long business trip to China. As he talks about the tour, he remembers the aspirations of his father, which he has recounted in his just-released autobiography, ‘Ormakilivaathil’.

“My father said that after my studies I could return and work on the farm, in our village of Parappur , near Thrissur,” he says. “Or I could be a school teacher, or a bank clerk. Thrissur had so many banks: South Indian, Catholic Syrian, and Dhanalakshmi. My father's ambitions were limited to that area only.”

But now, 66 years after Independence, the aspirations of parents have changed. “They want the children to get the best education and the best jobs anywhere in the world,” says Kochuouseph.

When he was a child, he remembers seeing visible poverty among the people. “Many were starving, especially during the monsoon season,” he says. “Fortunately, I belonged to a well-to-do family. My mother would help by giving foodgrains to the poor.”

Help also came in the form of the American PL 480 programme, in which wheat, milk powder, and cereals were sent to poor countries like India . “In our village, the local church distributed the relief materials,” says Kochuouseph. “Apparently, the US would dump its excess production in the sea. But later, they began sending it to less-developed countries.”

In the sixties, food was needed in plenty, because the families were large. “In my house, there were six children,” he says. “My uncle, who lived nearby, had eight. Another relative had eight children. Attention to one child was at the minimum. We used to get beatings and cry a lot, but who bothered? As a result, I became mentally and emotionally strong. Whatever happens in life, I can face it.”

School also toughened up Kochuouseph. Contrary to what most people think, he was a mediocre student, and suffered from dyslexia. “When I want to write the number 93, it will come across as 39,” he says. “If you tell me a ten-digit number, and when I write it, one or two numbers will go missing. So, I have to check and re-check the number that I am writing down.”

Once, during the English class, at St. John’s school, he was asked to read a chapter and failed to do so. “The teacher felt that I was not serious about my studies, even though I was trying very hard at home,” he says. “I was forced to stand on the bench and all my classmates laughed at me. It was a humiliating incident, but in those days all the students went through similar experiences.”

Kochuouseph bemoans the fact that children have become soft these days. “In a family, there are only one or two children, and there is a lot of pampering,” he says. “We give special attention. We analyse their emotional feelings. But outside the home, society is ruthless. The rule is survival of the fittest. So, a pampered child finds it difficult to cope with life, especially when faced with setbacks.”

When he became a teenager, he would bunk classes, along with his friends, and go to watch films. “Hindi films were very popular because they were usually shot in foreign locales, and it was fascinating to see those countries,” he says.

Kochuouseph remembers going to see an English film, ‘Patton’, at Sridhar theatre. “It was the only cinema that showed 70mm films,” he says. He would also step into the Sealord hotel, which was the biggest those days in Kerala. “I paid 75 paise for a cup of tea, which cost 20 paise outside,” he says.

The autobiography, which spans the years from childhood till Kochuouseph is 22, happened by accident. Three years ago, M.A. Ravikumar, a senior manager at Wonderla Holidays Pvt Ltd., which is owned by Kochuouseph, approached him and asked whether he could write a biography. The industrialist agreed. Work began. But sometime later, Kochuouseph read an article by journalist Sajil Sreedhar in a magazine. He liked the style and got in touch. Sajil agreed to get on board.

For the next three years, Ravikumar, Sajil, and Kochuouseph met once a fortnight, where the industrialist spoke about his past. The end result is ‘Ormakilivaathil’, published by DC Books.

But, as writer T. Padmanabhan wrote in the foreword, 'This book is only a seed. Now the peepal tree has to come up.' Kochuouseph smiles, and says, “Yes, I will be starting work on Part 2 very soon.”