Her Days and Nights 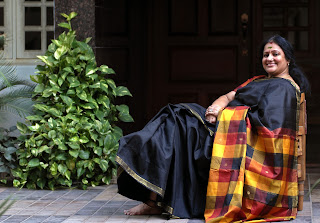 Seema talks about life with veteran director I. V. Sasi

One day, in 1977, Seema went to the Vijaya Gardens in Chennai to oversee the shooting of a dance sequence. Seema [original name: Shanthi] and a dancer Manisha had to wait a long time, since shooting had not begun. So they decided to have their tiffin. Suddenly, both of them heard somebody snapping his fingers.
When Seema turned to identify the sound she realised it was the director of the film, IV Sasi. Manisha said, “Why is the director calling us by snapping his fingers? Why can't he use our names?”

Seema remained silent. Then as she was going towards the dustbin to throw away a plastic packet, Sasi said, “Hey, come here.”

Seema said, “Santhi is my name. I am not a dog that you call me by snapping your fingers.”

“You are a chatterbox,” said Sasi. “There is a dance in my film, ‘Ee Manohara Theeram’. Will you do it?”

Seema said, “I don't want to do a song. I am already acting as a heroine in [Baby’s] ‘Nizhalae Nee Sakshi.’”

Sasi did not say anything. The next day, the dance master Vaikom Murthy went to Seema’s house and requested her to dance in Sasi’s film. “I decided to ask for a huge sum of money,” says Seema. “But Sasi agreed. I then asked for more. And again Sasi agreed. I said, ‘Give the money first’. And, amazingly, he sent it.”

So Seema had no option but to dance in the film. And it was after the shoot was completed that Sasi fell in love with her.

In the meantime, Sasi had begun work on ‘Avalude Ravukal’ (Her Nights). Not surprisingly, all the established heroines refused to act in it because the role was that of a prostitute. Sasi did make-up tests and took photo stills of Seema. He liked what he saw, and selected Seema for the role. Of course, it was a path-breaking movie and established Seema as a sexy siren in Malayalam films. By now, both of them were in a relationship.

A couple of years went by. In July, 1980, Seema’s mother, who bought her a diamond, showed it to an astrologer. He said, “It is good that you have bought the diamond now. By September, the girl should get married, otherwise she will have to wait for three years.”

When Seema heard this, she immediately went to Sasi’s house, in Chennai, and said, “If you want to get married to me, it should be before September, otherwise, forget it.” Sasi looked stunned. Then Seema left for the shoot of the film, 'Chaghara', near Thrissur.

A couple of days later, there was a phone call. Sasi told Seema the marriage had been fixed for August 28, at the Mangad temple, near Chennai.

And on schedule the marriage took place. But there was no chance for a honeymoon, as Seema had to return to the shoot. Today, 33 years later, Seema is happy. “I am grateful to Sasi Chettan for being with me for so many years and for never abandoning me,” she says. “My husband is a good person and a great director.”

In fact, cinema is Sasi’s first love or as Seema says, “It is his first wife. I have no problems with that. It is through films that we have earned our bread and butter. So I am happy he is so passionate about it.”

In fact, so intense is Sasi's commitment that when the film’s release day nears, Sasi goes through an enormous tension. And, irrespective of whether it is a hit or a flop, the director goes through severe loose motions for a week. “That will give you an indication of his commitment,” says Seema.

But both are like chalk and cheese. While Sasi never talks, Seema is loud and voluble. “I think in 33 years we must have spoken to each other for 15 days,” she says.

Nevertheless, this taciturn man has been good to his children. “For my daughter, Anu, he is her life,” says Seema. “He is more like a friend, than a father.”

Anu is married to Milan Nair, who works for the Commonwealth Bank in Sydney, while she has a job as an academic coordinator in a college. Son Ani Sasi has been working as an assistant to director Priyadarshan for the past three years.

Today, Sasi, a veteran of over 150 films, is planning to make a new film, based on a script by Sanjay and Bobby. And Seema is there to offer moral support.

Asked for tips to have a good marriage, she says, “It is wrong to give advice. Because nobody, not even your own parents, can understand a marriage from outside. It is only the husband and wife who can make or break a marriage.”