The World of Maids 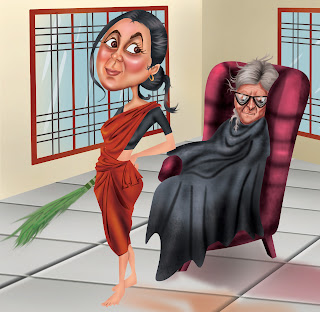 Maids talk about their experiences working in homes

Pushpy Johny, the secretary of the Self Employment Women's Association (SEWA) organisation, in Kochi was worried. One maid, Thankamma, had been staying for months in an apartment in Panampilly Nagar looking after an old woman, Sarah Mathew. Usually, the servants are changed after two months. So Pushpy went to check.

The old woman told Pushpy, “I want this maid with me till I die. I do not want a change.” In the end, Thankamma stayed with Sarah for three years. And when Sarah died, Thankamma got a pleasant surprise. According to Sarah's dying wish, she wanted Thankamma to have her earrings. Apart from that, the family gifted a TV set to her.

Looking after an old woman is never easy. “I have to make them have a bath,” says a maid, Anju Santosh, 32. “Then make them eat. Give the medicines at the right time. Wash the clothes and keep the room clean at all times.”

Most of the women range in age from 80 to 90. “Some get very angry very quickly,” says Anju. “When people become very old, they become like children. But I have to manage them. I have looked after ladies who had cancer, and high blood pressure, but the majority are suffering from diabetes. So I have learnt to give diabetes injections.”

One of the problems of looking after old women is that you have to deal with excreta and vomit often. “Many of the maids say they cannot manage and opt out,” says Pushpy.

One of them is Lailamma John, 48, who has been with SEWA for 18 years. “I only work with pregnant women,” she says. “The main reason is that I love children. With old women, it can get depressing, So I have stayed away.”

Lailamma, who gets a monthly salary of Rs 9000, stays at a home from one to four months.
Apart from looking after the baby, Lailamma also gives baths to the young mothers using Ayurveda oils.

Asked for the plus points of her job, she says, “Sometimes, the family I work for, gives clothes, or bits of jewellery. Relatives who come to visit the new-born child will give me Rs 100.” Adds Pushpy: “People have also donated money for a maid’s marriage or the building of a house, apart from the education of the children.”

Of course, it is not a smooth job all the time. “Sometimes, employers will not give me food at the right time,” says Lailamma. “Or they will give the leftovers of the previous day. Or the food will be too little.” Thanks to the mobile phone, Lailamma will call up Pushpy and inform her. She will then give a call to the family and, in a polite way, voice the complaints. “Most of the time things get set right,” says Pushpy.

Of course, in this job, one major hazard is sexual harassment. “If a maid complains of this, we will immediately withdraw her, call the family to our office, return the registration fees and have nothing to do with them again,” says Pushpy.

Interestingly, Pushpy rarely goes to the police. “It is too time-consuming to file a complaint and to follow up on it,” she says.

But instance of sexual harassment are rare. “Men know that the maids belong to a women’s organisation and if we want, we can create a lot of problems for them,” says Pushpy. “Hence, they behave properly most of the time.”

And this is the case of those who do not work under the umbrella of SEWA. The Chembumukku-based Baby Amma, 48, who has two college-going children, has been operating on her own for the past eight years, ever since her husband died. “I have worked in several houses,” she says. “But, so far, I have not had any problems. And even my friends have said that they have not faced any problems.”

The only problem Baby Amma faces is when she tries to take leave to go for weddings and to get her widow’s pension from her home town of Kozhikode. “Sometimes, it is my fault,” says Baby Amma. “I will ask for leave at the last moment. And that can create a problem. My madam, Lakshmi, is working, so she will get delayed, as she has to cook the food for her husband and children, before she leaves for work.”

Meanwhile, at the SEWA office, Pushpy is fielding calls all the time. “The demand for maids is more than the supply,” says Pushpy. “That is because several of the young maids have gone to Bangalore or Chennai where they get salaries of Rs 10,000 and upwards by working in the homes of young people who are employed in the IT companies. So, in Kerala, we have less and less people to do these kind of jobs.”