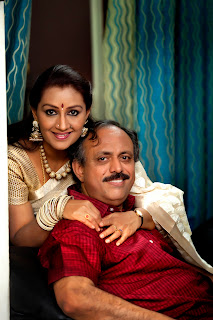 
When producer Suresh Kumar saw the actress Menaka, she was not even aware of it. Suresh, along with the director, Priyadarshan, had gone to Menaka’s house in Chennai to get her to commit for the Tamil film, ‘Karaiyai Thodathe Alaigal’. “My father told them I was unwell,” says Menaka. “Suresh told me later he saw me lying in the bedroom, wearing a pink chiffon nightgown. He said that since he was a big fan, he had wanted to see me. That was why he had come to the house with Priyadarshan.”


But they spoke often on the sets of the 1984 film, ‘Poochakkoru Mookkuthi’, in which Suresh was the producer. During the shoot, Menaka realised that Suresh was very finicky about what he ate. One day, after pack-up time, they returned to the Amrita Hotel in Thiruvananthapuram, where they were staying. While going up in the elevator, Menaka said, “Suresh, it is very dangerous to be so particular about the food. Before you marry you should take the girl to your home and get her taught by your mum, otherwise it is going to be very difficult for her.”


Suresh smiled and said, “So, when are you coming to my home to have a practice?”


That was when Menaka realised that Suresh had feelings for her. “I called my mum, told her what happened, and confessed my own love for Suresh,” says Menaka. “I liked him very much.”


But it was not going to be an easy match. While Menaka belongs to a conservative Tamil Brahmin Iyengar family, who are strictly vegetarian, Suresh is a Nair who eats non-vegetarian food. Anyway, it took four years before the marriage took place, at the Lord Krishna temple, at Guruvayur, on October 27, 1987.


For their honeymoon, Suresh had dramatically opened a world map and placed it on the floor. He pointed at several places in Europe and America, but in the end they went to Kanyakumari. In the car, there was Suresh, his brother, wife and son, apart from Menaka.

Along the way, people from the film industry, like director Vijayan, Sanal Kumar, and P. Radhakrishnan joined in. The group reached Kanyakumari at 2 a.m. There were no rooms at the Ayyappa lodge that they went to. “Eventually, we got a servants’ dormitory on the terrace,” says Menaka. “Later, when we told this to Priyadarshan he showcased this scene in ‘Mithunam’, which stars Mohan Lal.”


For Menaka, Suresh is her star. “He cares a lot about me and the children, and my family,” she says. “He has a helping tendency. If a friend and I are facing some problems, he will solve the issues of the friend first. He knows that I will wait and understand.”


And, she says, Suresh treats her like a queen. “I have no work in the house at all,” she says. “I have maids hence I don’t need to suffer in the kitchen. Even for buying vegetables, I have people. But I would tell him that every 15 days we should go out together and buy some household things.”


They did it only once in a while because Suresh is very active in his career. There are times when he has his food, while Menaka serves him.  “But when I start having my dinner, he will leave,” she says. “So, nowadays, I lock the dining room door and keep the key with me. I tell him, ‘Please wait till I finish my dinner. I am alone. [Their two daughters, Revathi, 24, and Keerthi, 20, are working and studying respectively]. Please look at my face and go’. He laughs, but is helpless at the same time. He is just too busy.”


But there were times when they were together constantly. That was when they went on a four-month trip to the USA in 1988, as part of an All Stars programme.

The other members included Shankar, Shahnawaz, Prem Nazir, Kuthiravattam Pappu and Nadia Moidu. “The programmes would be held on Saturday and Sunday,” says Menaka. “During the week we went sight-seeing in places like New York, Chicago, Michigan, Los Angeles, and Dallas.”


But since Menaka only ate vegetarian food, there was a constant quest for it in non-vegetarian America. But many times Suresh would forget about it. “I was crying because I could not get my type of food,” says Menaka. “Finally, it was Prem Nazir who bought me many dishes. He said, ‘Suresh is a nice person, but he is only four years older than you, and that is why he is forgets. Whatever you want, I will get it.’”

(The New Indian Express, Kochi and Thiruvananthapuram)
at May 14, 2013