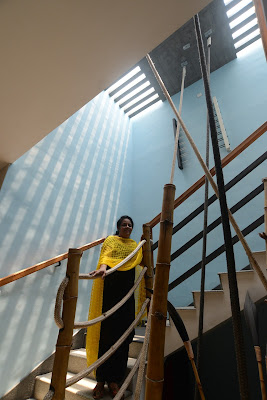 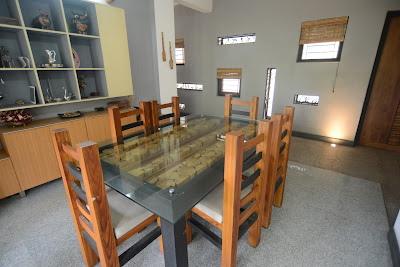 Sherly, wife of Benny Behanan, MLA, talks about her house at Thrikakkara

It is only at 10 p.m. that Benny Behanan, the MLA, gets free. That is when he repairs to his ground-floor bedroom at Thrikkakara. At one side, near the bed, there are two armchairs facing each other, near windows, which open out to a lawn. Wife Sherly sits opposite him. They chat about the events of the day. “It is the only period when we get to spend time with each other,” says Sherly.

It is a spacious bedroom. There are wooden slats placed in triangular and rectangular styles on the wall just above the bed. “These are the remnants from our earlier house, which our architect Suku [Dass] did not want to throw away,” says Sherly.

Indeed, they had been staying in the same area for more than two decades. The initial plan was to renovate the house. But a friend of Benny's suggested that a new house be built, since the original one was below road level. In the end the Behanans agreed with the suggestion. “We did soil-filling at the location, so that the house could reach the road level,” says Suku.

And three years ago, the house came up. The 3200 sq. ft. house has a sloping roof and a wide garage. Sherly had asked for one important attribute: there should be plenty of light inside the house. So Suku opened up a section of the terrace, just above the staircase, and placed a glass pergola. As a result, the sunlight just pours down the stairs. “I wanted to create a play of light and shadow,” says Suku.

And in a rectangle, near the staircase, filled with small rocks, Suku has embedded old bamboo poles and oars. A thick rope is connected to the ceiling. “I put in the ropes to emphasise the height of the stairwell,” says Suku, who got the ropes from a second-hand shop at Mattancherry. These had been used to hold a ship's anchor. The bamboo, which was treated naturally, was sourced from Adimali.

One visible result is that there is, indeed, a lot of light inside the house. “Whenever we go to other homes, I always get a feeling that there is not enough light,” says Sherly.

Among the many rooms, the dining room is the favourite place for Sherly. “Since it is South-facing, there is a lot of breeze in the evenings,” she says. “Tea and conversations takes place here often with family members.”

In the dining room, under the glass-topped table, Suku has embedded several wooden blocks and reepers. “These are the materials of the previous house, which I retained,” he says.

From the kitchen, the living and dining room, as well as the rooms on the first floor, the main gate is easily visible. “My son, Venu, and daughter-in-law are hearing-impaired,” says Sherly. “So Suku has designed it in such a way that they can see the gate at all times.”

On the first floor, in Venu's bedroom, there is a study area at one side. Suku has made a glass skylight on the ceiling so that natural sunlight can light up the room. On the opposite end, of the house, there is a family room which doubles up as a home theatre, with wall-length carpets adorning the floor.

As for Benny's office, it is located on the ground floor, at one side. There is a separate entrance, with inbuilt seats on the verandah. “This ensures our privacy,” says Sherly.

Overall, she is happy with the house. “There is a lot of positive energy inside,” she says. But there are a couple of drawbacks. “There is not much space in front, but the total area is only 11 cents,” says Sherly. “The garage seems to be small now. Again, this is not Suku's fault. We have three cars now.”

Another drawback: the road outside is narrow. So visitors have to park their vehicles on the main road, 50 metres away, if they want to visit the Behanans. “But we have nice neighbours,” says Sherly. “And there is plenty of water in the well.”

One of the first functions to be held in the house was a wedding reception for Venu on December 25, 2012. “[Senior Congress leader] Vayalarji [Ravi] came to the house the previous day,” says Sherly. “He liked the house. In fact, Vayalar Sir's daughter, Lakshmi, wanted to hire the same architect.”

(Published in The New Indian Express, Kochi and Thiruvananthapuram)
at June 23, 2015